Legalize it
Don't criticize it
-Peter Tosh, "Legalize It" 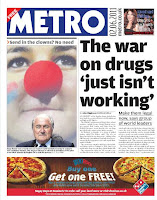 Any time the topic of drugs and legalization comes up, you'll hear a chorus of people saying the same thing. In fact, recently Pat Robertson made the statement in an interview recently:

I’ve never used marijuana and I don’t intend to, but it’s just one of those things that I think: this war on drugs just hasn’t succeeded.

It always comes up. People list the cost, the fact that drugs keep coming into the country, how the border can't be controlled and so on. The argument goes like this: we tried to stop drug use by making them illegal, and it didn't work, so we should make them legal.

However, this argument - the 'its not working' one - is trash. We do not pass laws in order to stop crimes, we pass laws in order to punish people for committing them. The fact that people keep stealing even though theft is outlawed is in no way any kind of recommendation that we end the war on theft.

This argument presumes that a certain level of success in stopping a crime is required or we must end enforcement of a law, which is absolutely absurd. People speed every day, everywhere yet that is no argument for ending traffic speed laws. What that means is that the laws by themselves are insufficient to create ethical human behavior, which has been known since the first law was written.

It does not matter if a law is being successful at stopping a crime, or slowing it. That's not why we pass laws. We pass laws because society has deemed that committing that crime is sufficiently damaging to all of us that it should face legal sanction. How effective the law is at stopping the law has absolutely nothing to do with whether it should exist or not.

This is the kind of argument that people think up in college and cling to because it sounds so very clever, but falls to shreds in the light of reason. Its similar to the "alcohol is legal so we should make more things legal" fallacy. I can't stand that kind of thing, but its so easy and seems so smart that it keeps coming up over and over again, even from people who really ought to know better and are rational enough to avoid such a trap.
Posted by Christopher R Taylor at 8:53 AM

A better question is "Is this law worth it?"

Making a heavy investment of public resources to combat theft, murder, rape, etc... tends to be worth the expenditure even if those crimes still happen, because the in every case there is an identifiable victim. There is always a bad guy to catch.

It's kind of hard to identify the victim of a guy who gets off work on a Friday night, goes home, sits in a quiet room, smokes a bowl, and listens to Pink Floyd for a couple of hours before going to bed. One could argue that society is the victim because he is disregarding its laws. That's a fair argument, but it also invites the question of how logical it is to have laws that prevent people from smoking pot and sitting in their living room listening to Pink Floyd.

That's a more useful argument than the "its not working" canard, because it focuses more on the justice and how reasonable the law is rather than its effectiveness.

"It does not matter if a law is being successful at stopping a crime, or slowing it. That's not why we pass laws. We pass laws because society has deemed that committing that crime is sufficiently damaging to all of us that it should face legal sanction."

Now,you tell me which is more damaging to the general public,the act the law seeks to prohibit or the enforcement of the law in question?

Again, if that's the kind of argument you want to make, then you're at least being honest and logical, whatever its merits. But to say the law "isn't working" is a worthless, idiotic argument.