ITS DIFFERENT WHEN WE DO IT

"When are we going to wake up and realize that not only do girls just want to have fun, girls are the only ones allowed to have fun?" 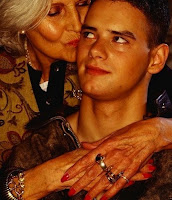 I couldn't let this article go by without comment. I saw it on Instapundit first, so probably most of you have seen it already but it just is too much to let pass. On the web site The Frisky, Rachel Rabbit White wrote about her tendency to date younger guys, which started in high school. She's in her 20s now and still doing it, and relates this tale:

His name was Patrick, but everyone referred to him as “the 17-year-old.” That was how his number was saved in my phone. I met the 17-year-old while visiting my 17-year-old cousin in the burbs. I was 22. The cousin brought me to a high school party. Patrick was in the corner, tall and spidery with olive skin.

After a few shared cigarettes, I found myself making out with him on the hood of my car, our bodies causing the metal to cave where we lay.

Leave the suburbs and come live in the city,” I said, the moon looming above us.

This was a bad habit I had. When hooking up younger boys, I thought it was important to leave them with a nice, albeit unrealistic, thought of our future together. I told Patrick we could go to parties, sleep in the same bed and smoke cigarettes together all the time.

Now that last paragraph is pretty important, because when commenters read this they pointed out a problematic double standard here. You've probably hit on it already.

Reverse those roles and say a 22 year old guy is dating a 17 year old girl. What's he called now? What would the police say? Yeah, exactly what commenters said, which prompted the site to add this disclaimer a the bottom of her article:

Editor’s Note: The author does not at any point write that she, as a legal adult, had sexual intercourse with anyone underage. Feel free to disagree/disapprove of her tone/actions, but describing those actions as “statutory rape” is not accurate.

Really? So when she said she is always "hooking up" with younger boys, she meant going fishing together? When she said the boy thought they would "always" sleep together in the same bed, they were just spooning all night?

The fact is, this woman likes to sleep around with underage boys. And as I've pointed out many times in the past, for some reason people shrug at that while they cry foul at the reverse. Commenters were all over this for good reason: she just admitted statutory rape and acted like the only problem was her tendency to lead the boys on to think it meant more than just casual, callous sex for her.

Yes, she's a slut, or at least sleazy, but that's not the point here. The point is that this woman - and the editors of the site, and some of the commenters - had absolutely no problem with this situation. They probably didn't even consider the age difference to be significant, only a setup for her main point.

Yet her main point is reprehensible as well. She feels guilty for misleading these guys but not guilty enough. She doesn't actually see any ethical wrongdoing here, only discomfort at how she made them feel. And again, she feels absolutely no shame at describing her actions to the world, other than a little twinge of heavily seared conscience at making a boy feel bad.

When men consistently date underage girls, or even women significantly younger than them, women rightly hold them in contempt. He's not grown up, he's immature, he preys on the less mature and young. Its wrong, its a sign of something problematic.

When women do it, they get special sexy-sounding names and boys fantasize about the possibilities. Women brag about it: I can get young, handsome boys to lust after me! Yeah, well it doesn't take much, ladies. This was a pretty horrible article and signal of something deeper wrong with culture that it was even considered for publication. And its timing is pretty appropriate these days of double standards, too.
Posted by Christopher R Taylor at 7:56 AM