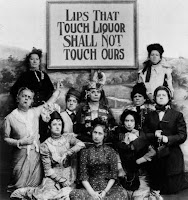 No, the most basic issue here is not religious morality, individual liberty or fiscal responsibility. It's that a society in which middle-age children of privilege testify before the most powerful figures in the land to demand state-enforced funding for their sex lives at a time when their government owes more money than anyone has ever owed in the history of the planet is quite simply nuts.

Then there's the leftist group who came up with this cunning plan:

In light of the recent war on women, we are calling for a nationwide sex strike from April 28th to May 5th. All women should withhold from having sex with their partners.

This will help people understand that contraception is for women and men, because men enjoy the benefit of women making their own choices about when and if they want to get pregnant.

So... you're going to avoid having sex, to promote the idea of contraceptives. Isn't that what the joke about an aspirin between the knees was all about? Next we have Ann Althouse who asks:

If Obama could say "Maybe you’re better off not having the surgery, but taking painkillers" to an elderly woman with a bad heart then, in parallel fashion, why shouldn't the government tell young women who want birth control that they are better off using condoms rather than more expensive methods?

Sure, if its about cost savings and coverage, instead of centralized government control over the economy and crushing enemies of the state.

SENATOR JOHNSON (R-PA):The bottom line here is, the cost of this healthcare law is so uncertain, don’t you think we ought to put the brakes on it? You know, Nancy Pelosi said, ‘We have to pass this law to figure out what’s in it.’ What I don’t want to see is that we have to implement it to figure out how it’s going to bust a hole in our already horribly broken budget.

JOHNSON: Right. So, the original estimate for deficit reduction–

JOHNSON: The original estimate for deficit reduction in the first 10 years was $143 billion, correct?

JOHNSON: So now we, we’ve reduced that $143 billion by $86 billion – by not getting revenue from the CLASS Act – and now $111 billion because we’ve increased the mandatory costs of the exchanges, correct?

SEBELIUS: I’m assuming the numbers are correct. I’m sorry I don’t have them.

JOHNSON: So, when you add those together, that’s $197 billion added to the first 10-year cost estimate of Obamacare, so now we are instead of saving $143 billion, we are adding $54 billion to our deficit, correct?

Ms Sebilius is the one directly in charge of the Government Health Insurance Takeover Act. She handed out all those thousands of waivers to Obama allies like unions. She can't or won't admit to the costs of this bill but the budget office is not admitting that it will cost billions. Which really shocks no one, I suppose.

Again this was never about cost, or really even health care. Its about power.
Posted by Christopher R Taylor at 9:09 AM

Statistics vary, but somewhere in the range of 50% of women who take birth control pills take them for reasons other than sexual activity. Birth control pills are in fact a less popular method of birth control for younger, sexually active people, as they require a prescription (some younguns don't want to tell a doctor what they're up to) and don't protect against STDs (which would be a concern if you were sleeping around, rather than with one steady partner). It's more fun to pretend that Fluke is a slut and that liberals are demanding to be paid for sex, but that isn't the case at all.

Nobody should be surprised that Obamacare is more costly than projected, because everything is more costly than projected, particularly in government. But (relatively) unchecked private industry has had its chance. For-profit health insurance might work if it was run like it was supposed to - no lifetime caps, no being dropped for a prexisting condition, no purposeful dodging of coverage during emotionally stressful times. It doesn't work, and it's been driving up costs for everybody. So a duly elected government is regulating the industry. If you call it a power grab, it at least should be admitted that it's a power grab that comes from a vacuum.

Its almost like you didn't read a thing that was posted at all.

?
Yep, read it and responded. But of course there's no reason for you to show me the same courtesy.