“Did Sarkozy’s far-right rhetoric fan flames of ethnic hatred?”
-UK Independent
A deranged gunman shot up a Jewish school in France, killing eight, including these four: 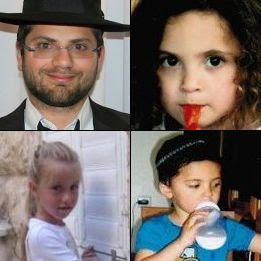 The man was hunted by French authorities, who presumed he had a military or police background from his proficiency with weapons and stated that he was probably a neo-Nazi like Norwegian Hans Breivik. The condemnation of right wingers started up again, and everyone went out of their way to avoid the other possibility. Sure, Breivik is wildly socialist and left wing, but that's just a troubling detail.

Then the man was caught. His first name was funny for a neo-Nazi: Muhammad. In fact, he is a rabid Muslim, a jihadi who claims membership in al`Qaeda, a man caught fighting for the Taliban in Afghanistan by US Forces, who under President Obama's rules was shipped to France, where he went nuts and murdered people.

Instantly, the press ran out and tried to control this news. Ed West wrote for the Telegraph:

It’s easy to get it wrong because so many of the world’s varied extremists, whatever their motivation and however much they might hate each other, focus their anger and loathing on similar targets – the state, the city, modernity, capitalism, and the one group who embody all these complicating, unsettling changes in the minds of lonely, failed young men – Jews.

...as for the tragedy in France, it does not say anything about Islam, only of human nature and its potential for evil. All that matters ultimately is that three innocent children, a father and three young soldiers are now dead.

Ah but what if he really was a neo nazi right winger (a contradiction, but whatever)? Do you think Mr West might think his ideology was to blame then? Oh but he wasn't alone. The Guardian ran an editorial with these words:

The first to say what was on everyone's mind was not the Socialist challenger François Hollande but the centrist François Bayrou. He said the killings were the product of a sick society, with politicians who pointed the finger and inflamed passions. No prize for guessing whom he was talking about. Nicolas Sarkozy's lurch to the right has included such claims as there being too many immigrants in France, and that the French were secretly ingesting halal meat.

See, you can blame right wingers for anything bad that happens, but not Muslims. They're just a product of society, their religion has nothing to do with how they act, if its a bad thing, at least.

Meanwhile... the Fort Hood shooter, who screamed "Allahu Akbar" as he shot fellow soldiers claiming vengeance for his Muslim brothers in the middle east was declared a "job hazard" and has yet to be put on trial. The guy who went nuts and shot up families - almost certainly because they were harboring the ones who murdered his best friend but were declared off limits by his CO - has his trial being prepped and rushed through.

Surely I can't be the only one who sees this all as a bit backward?

*UPDATE: Even Nicholas Sarkozy himself is echoing the party line:

France has shown its indignation and grit but has not allowed anger to take over.

The Muslim faith has nothing to do with the insane acts of this man. Before targeting Jewish children, he targeted other Muslims.

I think you can overemphasize the "insane" part, which tends to divest someone of responsibility. Muhammad knew what he was doing, and why, and I suspect he'd tell you straight up its because of his faith. And he's hardly alone in this belief.

**UPDATE: Well I guess you can't ask him any more, he jumped out of a window with guns blazing and is dead after a 32 hour siege. Tell your namesake hi when you get there.

***UPDATE: In France, a school teacher insisted that Muhammad was a victim of "Sarko" who invented his al`Qaeda links and called for a moment of silence for the mass murdering scum. Most of the kids walked out of the class, although some stayed behind, apparently trying to figure out what on earth this woman was talking about. She's not on suspension.
Posted by Christopher R Taylor at 8:40 AM

"a man caught fighting for the Taliban in Afghanistan by US Forces, who under President Obama's rules was shipped to France"

Useful fact, if true, the stories I've read said, point blank, that there was NO record of him being captured in Afghanistan nor of how he returned to France.
Nothing I love better than beating up The One on the consequences of his decisions. But if the information is bogus, than that sword can turn in your hand and you're the one who gets cut.