"At what point does the newborn have moral status as an actual person? And who gets to decide that?" 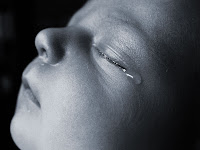 Professor Peter Albert David Singer is the Ira W. DeCamp Professor of Bioethics at Princeton University and Laureate Professor at the Centre for Applied Philosophy and Public Ethics at the University of Melbourne. An Australian, he has written extensively about the value of human and animal life, equating the two. Unlike many, however, he takes this argument to its logical conclusion.

In other words, instead of simply asserting that animals have all the rights and dignity of humans, he goes the other direction as well, asserting that humans have no more rights and dignity than animals. He's been very clear on this, stating explicitly that he supports killing children if they don't match up to society's or the parent's standards:

In a question and answer article published in the UK’s Independent today, controversial Princeton University Professor Peter Singer repeats his notorious stand on the killing of disabled newborns. Asked, “Would you kill a disabled baby?”, Singer responded, “Yes, if that was in the best interests of the baby and of the family as a whole.”
...
“Many people find this shocking,” continued Singer, “yet they support a woman’s right to have an abortion.” Concluding his point, Singer said, “One point on which I agree with opponents of abortion is that, from the point of view of ethics rather than the law, there is no sharp distinction between the foetus and the newborn baby.”

And he's right. Whether in the womb or out, there's no difference in a baby. Merely exiting a mother does not change a baby in any manner; or to put it another way, a newborn baby is no more or less worthy of life than a baby that has not yet been born.

Singer's only real distinction here is that he's logically consistent, not that he's unusually horrible or bloodthirsty. There's nothing specifically more evil about killing a baby outside the mother than inside. He's just ahead of the curve a bit.

See, if a respected professor at a prestigious university says something this reprehensible and shocking without any sort of consequences or loss of prestige himself, that means he's just on the cutting edge of progressive thought. He's not an outlier, he's a pioneer.

And here's evidence of what I mean, courtesy Derek Alexander:

...here is the abstract from a paper published in the Journal of Medical Ethics called After-birth abortion: why should the baby live?:

Abortion is largely accepted even for reasons that do not have anything to do with the fetus' health. By showing that (1) both fetuses and newborns do not have the same moral status as actual persons, (2) the fact that both are potential persons is morally irrelevant and (3) adoption is not always in the best interest of actual people, the authors argue that what we call 'after-birth abortion' (killing a newborn) should be permissible in all the cases where abortion is, including cases where the newborn is not disabled.

Its only logical that this take place. Progressivism knows no limits, and like sewage will follow a path downhill unless stopped by an outside force. Making it socially permissible, even preferred to accept abortion isn't the end point. "Progress" will always continue, pushing that boundary even further. And what is shocking and horrific one generation becomes ordinary the next and outdated the following.

If you believe the three theses offered in this abstract, then the conclusion is inevitable. If you think about abortion in terms of choice, freedom, and dealing with an inconvenience, then why

should that end at birth? After all we already have a president who fought hard to allow hospitals to starve babies born live from an abortion attempt, starve them to death. We're already in a culture where abandoning a baby to die isn't as bad as killing a pet.

Merely being human isn't enough for the progressive and modern culture to think you worthy of protection. You have to be a "person" which is defined not by your nature as a human being but by your functional ability, your pragmatic value. If you stop being sufficiently useful to society - or even begin to be too great a burden - then you may still be human, but cease to be a "person." Where, exactly, did you think this was going to end?

Oh, but by all means, scoff at warnings from the right. Mock us for being paranoid, hysterical, and radical. Your life isn't at stake, after all.
Posted by Christopher R Taylor at 8:16 AM