All of Rubin's cards were marked in advance
The trial was a pig-circus he never had a chance
-Bob Dylan, "Hurricane" 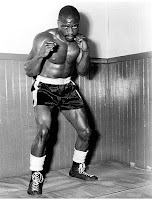 Bob Dylan has some great songs and some awful ones, but Hurricane is one of his best. It tells the story of a middleweight boxer in the 1960s who was found guilty of murder. To hear Dylan tell it, Hurricane was "obviously framed" and it was all a setup by lazy white cops and crooks who told an all-white jury lies.

Rueben "Hurricane" Carter, Dylan claims, was set up by racist southern New Jersey** hicks, the kind of pigs who pull over black folks for being in the wrong area, always hassling them. And the movie made recently carried that theme over. In fact, they showed how Hurricane had to deal with bigots his whole life, featuring a boxing match which he clearly won against Joey Giardello but the racist judges gave the white guy the win. That black guy was getting too uppity.

However, that's not exactly how things went. Sure it makes for a great story and you can hit all the right "white oppression, cracker bigot" buttons, but the facts don't match that narrative.

For instance, Hurricane lost the fight against Giardello, badly. He lost so badly that Giardello's estate sued the filmmakers for making him look bad and won. As for the murder, things aren't the way Dylan portrayed them.

By the age of 14, Hurricane had a rap sheet including assault, armed robbery, and violent mugging. He was thrown out of the military for being unfit for service because of his violent tendencies after four courts martial. The film shows a young Reuben Carter beating a pedophile over the head with a bottle, but in reality he'd done so to a man to rob him of his $55 watch.

Like Mike Tyson, Hurricane had a really rough youth and was a thug and street gangster who had a way out through boxing. But Mike Tyson never really grew out of being that thug, and apparently neither did Hurricane.


And the trial wasn't the smooth fix-up that Dylan portrays, either. There were two trials, each one messed up by prosecutor errors: specifically they didn't share all their evidence with the defense, which federal prosecutors have been nailed on a few times.

Hurricane was given a lie detector test, which he failed utterly. At the second trial, several of the witnesses on the defense admitted that they had been asked to lie for him to create an alibi. Several witnesses identified Hurricane's unusual white Dodge Polara's distinctive taillights and out of state plates in both trials.

When the Polara was pulled over (featured in Dylan's "the man keeps hassling black folks" bit in the song) the cop saw Hurricane lying in the back of the car, then let them go because the eyewitnesses said there were only 2 black men in the car (the man in the back seat not visible while lying down). The police report was at 2:40 AM, when the movie claims Hurricane left the Nite Spot, miles away.

Dylan and the movie both say that Arthur Bello, an eyewitness, couldn't have really seen or identified the men, but in real life, he told the cops they had the guy and let him go when he was shown Hurricane's picture. Later, Bello reversed himself, but his original testimony was played in the second trial. Although the first jury was of all white men, the second included two black men.

The timeline of the trials makes things rough for Hurricane. His first trial put him in prison. His second kept him there, but errors were made. By this time, Hurricane had been in prison 22 years, and at that point most of the witnesses were dead and the evidence was so old it was pointless to even retry him, so the courts let him out. He was never exonerated. He was convicted twice. 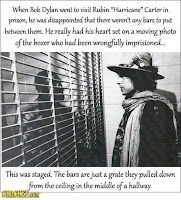 The movie even supports Hurricane's claim he was a major voice in the civil rights movement, when he had absolutely nothing to do with it. In Dylan's song, the unnamed man in the hospital claims Hurricane wasn't the man, but he actually just said he didn't know. Even Hurricane's boxing career was misrepresented: out of his last nine bouts, he'd lost 5 and was on the downhill trend. I'm sorry Bob Dylan, but at no time could he have been champion of the world.

Did he really do it? Its not clear although there's considerable evidence that points to his guilt. On the other hand, the case isn't very strong and is largely circumstantial. The weapon used in the killings was never recovered. I've never read of anyone attempting to establish any sort of motive, given that the register wasn't robbed. But there was enough of a case to convict him twice.

I have no doubt that in the 1960s as a black man, he faced a lot of bigotr,y and I suspect the cops were willing to bust a black guy on less evidence than a white guy. But the stories Hurricane, Dylan, and Norman Jewison tell in his movie do not match the evidence and the facts.

Once again: the fable that's generally known fits a useful narrative and is more attractive than the truth. So that's what gets told, even by people who really ought to know better. Still, great song.

*This is part of the Common Knowledge series.
**As a commenter noted, this took place in New Jersey, not the south.
Posted by Christopher R Taylor at 7:49 AM

Nice post which Mike Tyson, Hurricane had a really rough youth and was a thug and street gangster who had a way out through boxing. But Mike Tyson never really grew out of being that thug, and apparently neither did Hurricane. Thanks a lot for posting this article.

Can't believe how strong and quick these big guys are. Jump roping for a few minutes wears me out but these guys seem to have endless endurance. Don't know how they do it.

I just wanna say, there was no internet in the 70's and Dylan was really only going on what he was told, mainly by Carter himself. Also Dylan has not performed the song since 1976.