THE CALL THAT NEVER WILL COME 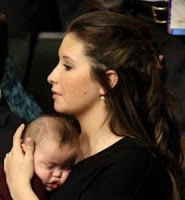 Bristol Palin is Exhibit A in why being a politician carries a heavy price. I don't mean how she's been treated, although that's another price, I mean her life. Being a politician means you have to dedicate the greatest bulk of your day to your job and networking, to being popular and liked and traveling around. It means you're not there to raise your kids very well.

So Sarah Palin is a successful politician and pundit, but her daughter gets pregnant (like she did) out of marriage by a total douchebag and ends up an example of how not to live. Still, Bristol has been making the best of it, trying to go on with her life. And if we're honest, we all have to admit that we've done stupid and wrong things in our past, things we'll always regret and should have known better. And its true that the best parents in the world cannot prevent their kids from doing dumb, self-destructive stuff.

We've been told over and over lately that we simply cannot judge women, that its insulting, evil, and "warring" against women to question their morality or behavior at any level - at least left leaning women. And in that theme, Bristol Palin has written a letter, to President Obama. It seems she's waiting for a supportive telephone call.

You don’t know my telephone number, but I hope your staff is busy trying to find it. Ever since you called Sandra Fluke after Rush Limbaugh called her a slut, I figured I might be next. You explained to reporters you called her because you were thinking of your two daughters, Malia and Sasha. After all, you didn’t want them to think it was okay for men to treat them that way:

“One of the things I want them to do as they get older is engage in issues they care about, even ones I may not agree with them on,” you said. “I want them to be able to speak their mind in a civil and thoughtful way. And I don’t want them attacked or called horrible names because they’re being good citizens.”

And I totally agree your kids should be able to speak their minds and engage the culture. I look forward to seeing what good things Malia and Sasha end up doing with their lives.

Bristol goes on to note the horrific things that have been said about her, such as by Bill Maher in particular - from whom the president accepted a million dollar campaign donation.

If Maher talked about Malia and Sasha that way, you’d return his dirty money and the Secret Service would probably have to restrain you. After all, I’ve always felt you understood my plight more than most because your mom was a teenager. That’s why you stood up for me when you were campaigning against Sen. McCain and my mom — you said vicious attacks on me should be off limits.

So she's waiting for President Obama to call. Waiting on his support, and for him to return the check. After all, what would Malia and Sasha say if they knew all the horrific things Maher has said? Why is he taking money from such a monster?

The bottom line, of course, is that President Obama agrees with Stanley Fish - he's one of their tribe, so it doesn't matter what he says, its not bad to say that about an enemy. And besides he needs that money, badly. He can't afford to give back a million dollars, no matter how toxic it gets.

Maybe I'm wrong. Maybe President Obama is a better man than I'm giving him credit for. I'd like to believe he is. I'd love for him to prove me wrong. Its easy to do, Mr President.
Posted by Christopher R Taylor at 9:13 AM