"I’m still more laid back than I used to be though, and have more patience with people." 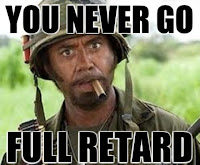 I'm fairly smart, as are my friends and family. I've grown up around people I had to struggle to keep up with mentally and its sharpened my wits considerably over the years. Its just been my life and I'm used to it.

It can be a curse sometimes, as it makes some entertainment not nearly as entertaining for me as it probably ought to be. I tend to mentally (if not verbally) demolish shows and movies I watch, and I'll end up tossing a lot of (especially fantasy) fiction aside after a few chapters, unable to put up with the plots and mistakes. I think I annoy people around me with my commentary watching television shows, so I try to keep quiet. An otherwise enjoyable film can be ruined for my by putting too many "what the hell?" moments in it (events that defy logic and plausibility).

The story Flowers for Algernon was devastating for me the first time I read it, and it still is pretty brutal to think of. If you're unfamiliar, its the story of a mentally retarded man who is given an experimental drug which makes him smarter and smarter until he's a genius and falls in love with his doctor (who loves him)... then it starts to wear off and he gets dumber and dumber. Its just heartbreaking to consider.

I honestly fear a future when my mind slows and dulls, where I start calcifying in my opinions and thoughts. I fear getting dumber and slower in short. I don't have a lot to offer as a human being other than my mind, and losing that would be difficult to face.

There's a story on the site Caveman Circus where a man tells what it was like to be a reverse Algernon due to an unusual vascular condition:

Even though I knew I had a worrying illness, I was happy as a pig in mud. I no longer had the arrogance of being frustrated with slow people, I abandoned many projects which reduced a lot of stress, I could enjoy films without knowing what would happen (my nickname before this used to be ‘comic book guy’ if you get the reference), and I became amazingly laid back and happy go lucky. I got on with people much better. I developed much more respect for one of my friends in particular who I always considered slow – it turned out he is much deeper than I thought, I just never had the patience to notice before. You could say I had more time to look around. The world just made more sense. The only negative, apart from struggling to perform at work, and having to write everything down, was that I no longer found sci-fi interesting – it just didn’t seem important. (I’m not joking, although it sounds like a cliché.)

Thankfully the condition was reversible and he's getting back to normal, but he learned some lessons about patience, social interaction, and dealing with stress which is good. The truth is, being less intelligent isn't a horrendous evil or wrong. It can be a benefit, where you just don't worry about things that upset others.

It would be a blessing to be able to watch, say, X-Men First Class without pointing out the glaring plot holes and inconsistencies (such as Shaw telling his people "we don't hurt our kind" then trying to murder the only black mutant in the cast). It would be nice to be able to not see contradictions and quandaries that bother me now.

And for those of us somewhat smarter, the most important thing to remember is humility: being a little smarter doesn't make you any better. You're no more a human being than the fellow who isn't as bright. He may be a far better person. And being dumb doesn't make you less a human, it just makes you human. We all have strengths and weaknesses and we should work together whatever they may be.

I tend to be pretty patient with people who are a bit less mentally acute, because most of the time they are that way not out of innate stupidity but just lack of learning to think carefully. You can be a lot "smarter" by simply exercising your brain, just like you can be stronger by exercising your body. Most don't. Most don't have the time or inclination, and its not easy - any more than losing weight or building muscle.

The folks I have no patience with are people who are willfully, deliberately stupid or irrational. People who will cling to something they know is wrong simply because they prefer it, or argue nonsense and illogic. That just drives me nuts. And I really should be more calm with that kind of thing. After all I'm not completely rational either, and I cling to stupid stuff out of a desire for it to be true, I'm sure.

And really does it matter that much? Not in the end. Charity and politeness really are virtues to be embraced. And it doesn't hurt me to be more pleasant and forgiving, even with people that frustrate me so.
Posted by Christopher R Taylor at 10:17 AM

I honestly fear a future when my mind slows and dulls, where I start calcifying in my opinions and thoughts.

Fear not. Why should you fear when you and I, among others, are right.

ed in texas
True story: Oldest son comes home on his first leave after an extended stretch in the military. His comment: "You know dad, other people don't mock the TV like we do..."