WHY I DON'T PITY DETROIT 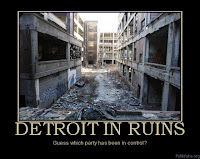 If you're like most people, you know someone who keeps tragically doing terrible, stupid things and suffering from it. The kind of person who seems to always make the wrong choice, walking straight into misery and catastrophe with their eyes open and ignoring all advice and warning from others. Comedian Joe Rogan had a bit about whales that beach themselves, suggesting that perhaps these are the retard whales and the sea is better off without them. He imagines a conversation between whales:

And despite feeling bad for that person, despite some sense of empathy and sympathy, you just can't feel too bad for them after the fiftieth time. Its like seeing someone slam their hand in the car door over and over. The first few times, you feel really bad for them and comfort them, get some ice. After a while you just wince and think "apparently he likes it."

I can't help but think that way about Detroit, Michigan. Yes, they're in awful shape, yes I feel bad for the individual people trapped there by the economy and near-impossibility of selling their home to move. Yes, I feel bad for the poor and the misery that people feel living there. But they did it to themselves.

Here's one example from the news, recently. Wal*Mart decided that with unemployment around 50%, Detroit youth could use a hand getting some work, and they could use some workers. So they set up a program to train students to work at Wal*Mart, learning how to run the cash registers, stock shelves, work with the public and so on. And the response?:


Donna Stern, a representative of the Coalition to Defend Affirmative Action, Integration&Immigrant Rights And Fight for Equality By Any Means Necessary (BAMN) is outraged. "They're going to train students to be subservient workers. This is not why parents send them to school."

Apparently some people want 50% unemployment. The attitude here is that these young people will be crushed into obedient drones, forced to obey the man. Now, if this wasn't Wal*Mart, perhaps the usual suspects wouldn't show up to hate on it, since that's one of the left's biggest Emmanuel Goldsteins, but the principle holds true: someone tries to help solve the problem and the left leaps up and down shouting how evil it is. Honestly, given the fact that most of the young unemployed people in Detroit are black I'm shocked the race card wasn't thrown down.

Detroit is a sort of witches brew of leftist ideology, corruption in government, citizen apathy, cronyism with big business, and modern hedonistic, selfish worldview. Its everything bad about America crammed into one test tube and left to fester for decades. Is it any surprise how horrid things have gotten there? And by this point, any effort to repair the city is instantly rejected as too radical, heartless, and insufficiently profitable for the powers that be.

And the occupy movement wants to spread that to every city and ever state. Their attitude is the same: I should be given everything without personal cost, and bill it to the rich. The Obama administration pulled people from Detroit and Michigan to help him work on the economy, he has one of the worst governors in the history of the country as one of his main advisers in Jennifer Granholm. He thinks that's how we ought to approach all of America, not just one city.

So my sympathy for Detroit is all worn out. You did it to yourselves, and you reject any solutions. Wallow in your misery. Let's just not do this to the rest of the country, folks.
Posted by Christopher R Taylor at 8:24 AM

"They're going to train students to be subservient workers. This is not why parents send them to school."

What has happened with starting at the bottom and working to a better job. Start with a starting wage job and learn the ropes, move you way up the ladder and earn your way. When I was in high school I had to do the lowest level of work I couldn't be CEO, and even after I got out of college I had to start at the "bottom" and work my way up. It's how it is supposed to work. You learn much better about the processes used, the ways things could be better, and some understanding of the total nature of the job by doing that. Coming straight in at the top doesn't work.

It is the Linsey Lohan of American cities.