'The judge introduced the concept of "libeling Islam" into an area of the law in which it was wholly alien.' 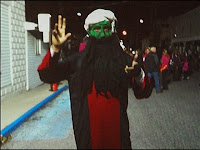 Last week, news broke of a man who wore a zombie Muhammad costume and went to a Halloween parade and got beat up. No he wasn't beat up because his costume sucked so bad he had to wear a sign identifying himself, he upset and angered a Muslim immigrant.

That's not exactly surprising, Muslims are notoriously lacking in a sense of humor when it comes to their holy figures, and well known for violence against those who mock Islam. Basically the guy was asking for it. Ernest Perce is an atheist who thought he'd make fun of the whole religious thing people find so dear to their lives and came up with the costume as a fun thing for Halloween.

However, that doesn't make what was done to him right, and its still assault to beat someone up even if you felt especially provoked. So the case went to court. The judge ruled that the assault wasn't a problem, that free speech didn't protect mockery of Islam. The judge threw out the assault case and lectured Perce on religious tolerance. Basically he ruled that if you beat up someone for mocking Islam, its not assault. He said:

"Having had the benefit of having spent over two and a half years in predominantly Muslim countries I think I know a little bit about the faith of Islam. ... In many Arabic-speaking countries something like this is definitely against the law there. In their society in fact it can be punishable by death and it frequently is in their society."

The man who leaped on his back in the parade and beat and choked him apparently thought that Sharia law applied everywhere and was just applying the proper punishment to Perce. And now, he's going to think that's still true - and in this judge's court, apparently it is. In the audio that was taken (illegally) at the trial, the judge's lecture includes a claim that he personally is a Muslim.

Later, a few statements came out supposedly from the judge himself. At the Volokh Conspiracy, Eugene Volokh has the full statement which includes these lines:

This story certainly has legs. As you might imagine, the public is only getting the version of the story put out by the “victim” (the atheist). Many, many gross misrepresentations. Among them: I’m a Muslim, and that’s why I dismissed the harassment charge (Fact: if anyone cares, I’m actually Lutheran, and have been for at least 41 years).
...
He said that I kept a copy of the Quran on the bench (fact: I keep a Bible on the bench, but out of respect to people with faiths other than Christianity, I DO have a Quran on the bookcase BESIDE my bench, and am trying to acquire a Torah, Book of Mormon, Book of Confucius and any other artifacts which those with a faith might respect).
...
In short, I based my decision on the fact that the Commonwealth failed to prove to me beyond a reasonable doubt that the charge was just; I didn’t doubt that an incident occurred, but I was basically presented only with the victim’s version, the defendant’s version, and a very intact Styrofoam sign that the victim was wearing and claimed that the defendant had used to choke him. There so many inconsistencies, that there was no way that I was going to find the defendant guilty.

Apparently there was video of the assault, but the judge refused to allow it in court. Also note that the court ruling said nothing about insufficient evidence or lack of ability to decide, but that he would have been killed in another country.

Here's the basic problem with the judge's approach. There is a principle called "fighting words" in which free speech is limited by expressions which are so offensive and outrageous that they will normally result in violence and outrage. In other words, your freedom of speech does not allow you to do or say something so incredibly outrageous that normal people will rise up in spontaneous violence against you.

But that principle is for American culture and norms. Its what would normally and predictably result in that kind of response for this culture, not for another. How people would respond to speech in another culture is totally irrelevant to the case. Throwing out the complaint because someone would have been killed in Saudi Arabia is not just stupid, but criminally false in the US. It simply does not apply.

In addition, CNN interviewed the judge, and while it was a very friendly interview, some lines came out of the event which I find problematic:

CNN: … There are some who believe you were failing to protect that right.

Judge Martin: No, I don’t think so. Here’s the thing: It’s a right, it’s not a privilege, it’s a right. With rights come responsibilities. The more that people abuse our rights, the more likely that we’re going to lose them.

As Volokh notes, its more likely we'll lose rights if you deny protection of them than if someone does something others find offensive. But the judge doesn't seem to understand the distinction between privileges and rights, or at least what a privilege is.

Privileges are by definition something special extended to another by someone in authority. For most people, this is how they understand the definition of rights, that you have a "right" only because a law or someone in power lets you have it. That's completely false. governments and authorities can neither create nor remove rights, they cannot be extended to someone or taken away. Privileges can. So you can have the privilege of being president, but not the right. You can have the privilege of birth control medication, but not the right.

This judge seems to think that privileges cannot be taken away but rights can be. Further, he seems to think that free speech is limited to the extent that it interferes with Islamic law. But this isn't uncommon. Free speech is regularly limited and assaulted by people who feel someone has been offended. Saying certain words to certain people can get you jailed in some areas.

This nation has taken a leap backward from the liberties and rights fought so carefully for over its existence. The high point seems to be the 1970s when blacks and women were finally extended full societal protection for their civil rights, but before political correctness, campus speech codes, and "hate crimes" legislation reared their ugly heads. Now we're sliding back toward repression and loss of civil rights again, all in the name of politeness and well meaning.

And its not just in America this is happening. Consider this little story from Australia, in the Herald Sun:

David Jones, 67, commented on the ease with which a woman with her face covered by a hijab had walked through security controls, the Daily Mail reports.

"If I was wearing this scarf over my face, I wonder what would happen,'' he said to an official as he went to pass through an X-ray scanner at Gatwick Airport.

To his surprise he was met on the other side of the barrier by officials who detained him for an hour in an attempt to force him to apologise for making an offensive remark.

The Security guard was a Muslim and she felt offended by his statement. His statement and the concern behind it seems perfectly reasonable to me.

Or consider EPSN sports writer Anthony Federico, fired for using an extremely common term hundreds of other sports writers have used in the past, referring to a gap in defense or a weakness on a team. Like the use of the word "niggardly" it suddenly was banned and considered so vile that the man had to lose his job because it sounds like a racial slur.

There's a reason blogs like Ace of Spades will have all sorts of foul language on them but censor the word "nigger" these days. Because using the F word repeatedly is considered "genuine" but using racial slurs is considered unrepentant evil. Control the language, and you control society and thought. Obscene language that would have gotten your face slapped a few years ago is considered not just acceptable but even preferable by many now, but other words are so horrible they may not be spelled out.

People lose their careers and have to go on huge apology tours for saying something the correct, protected group finds offensive these days. Respected and talented producer Brett Radner lose his production work at the Oscars for saying "Rehersals are for fags" and is running around apologizing and groveling in hopes of getting work again some day.

You can say anything you want in Hollywood about Christians or Republicans, white people or conservatives; you can say any four letter word in any combination and nobody even notices, but if you say something that someone in a protected group finds offensive, you're doomed. Its the same kind of ridiculous hypocritical corruption that always has been in that town, but the targets have shifted slightly.

And it all boils down to this: the establishment culture and the people in charge have their moral structure and their set of commandments. If you break them, you suffer. And after 9/11 in a perverse, suicidal overreaction, the left has decided Muslims are to be protected even more than most other groups. They are so afraid of seeming racist and oppressive to the "other" that they're being oppressive to their own culture.

I don't know if this judge is Muslim or not, its difficult to know what to believe, since he both claims he is, and claims he is not. Did he slip up in court and tell the truth, then run to backpedal? Did he say something stupid he didn't mean in court for effect, or misstate and now is telling the truth? Who knows. All that matters is that he's trampling all over the very principles of freedom of speech, defending criminals in the process, and should be immediately impeached because he cannot do his job properly.
Posted by Christopher R Taylor at 8:04 AM