"I didn't really do anything; I was just doing my job." 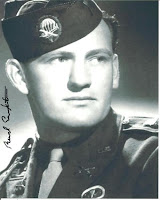 In the miniseries Band of Brothers, Lieutenant (later Captain) Winters stands tall and is a historic figure of greatness and leadership. However, he also had some very capable men working under him, and none more capable and steady than Buck Compton. Without men like Compton, Winters couldn't have carried out his plans and would have amounted to nothing.

And Compton went on to great things after the war. He walked away from World War 2 with a purple heart and a silver star, then went into law. Dennis McLellan at the LA Times tells the story:

As a Los Angeles deputy district attorney, Lynn D. "Buck" Compton was known for heading the three-man team that successfully prosecuted Sirhan B. Sirhan for the 1968 slaying of U.S. Sen. Robert F. Kennedy.

And after then-Gov. Ronald Reagan appointed him to the 2nd District Court of Appeal in 1970, he was known as one of its most conservative jurists.

He never stopped fighting for justice and finally, at the age of 90 has died of a heart attack after a long and meaningful life. Like all the men who fought in that war, he simply saw himself as a soldier trying to do his job and get home.

The rest of us saw him as a hero, for his whole life. And I'm sure his family never lost sight of that, either. Although they were apparently amazed at his sudden fame after Band of Brothers came out.

Compton was played by the very underrated Neal McDonough who now is working as a crazed, grinning mobster in the third season of Justified (up to its first season standards). I think he did Compton justice in the show, but could never live up to that caliber of man no matter how great an actor he may be.
Posted by Christopher R Taylor at 7:52 AM