"A year from now, I think people are going to see that we're starting to make some progress. If I don't have this done in three years, then there's going to be a one-term proposition."
-President Obama, 2009
Fair or not, the economy is always blamed on or credited toward the president. When things go bad, people blame the figurehead. When things go well, they praise him. It can be completely out of a president's hands when things go wrong; for instance if terrorists blow up a massive financial center, or there's a huge savings and loan crisis that formed before he became president.

At the same time, the president is a leader, he helps shape congressional policy, and he does have an impact on the economy through the various agencies of the executive department, his speeches, and his ideas. For example, president Obama's EPA has been creating regulation after rule after requirement that is very damaging to business and productivity in the name of saving the environment.

Or for another example, President Obama's hard work to get the Government Health Insurance Takeover Act passed, pressuring congress to get it done for his legacy so he didn't look like a fool. As a result, businesses are watching a greater and greater burden be placed on them step by step and no one is exactly sure how expensive and troublesome this bill will be when fully implemented in 2014, assuming it isn't stopped before then.

So the president can have a significant impact on the economy, even if they aren't exclusively to blame - or credit - for how things turn out. And the Obama record is very, very poor. Here's a handy chart to see how things have gone since he took office: 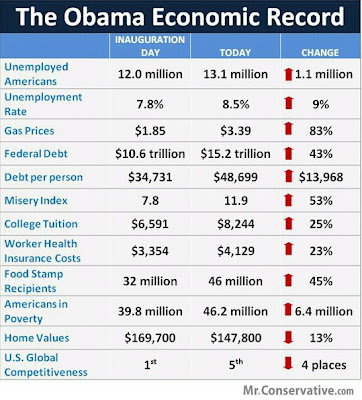 And that chart doesn't show the downgrade of the American economy as an investment by various ratings agencies or food price increases (up by 30% or more for some foods).
This is the problem with the Obama presidency. He was handed a lousy economy and made all the wrong moves. Like FDR, he used the crisis as an opportunity to implement his dream policies and socialist schemes. Like FDR, he made a bad economic situation last longer and get worse in many ways. Unlike Reagan, he didn't turn around the economy and produce a far better situation for the nation.

Recently the Congressional Budget Office released a report on the economy and among the various things it said was that everyone should expect 7% unemployment or higher for the next 4 years, and remain over 5% past 2022. Now its absurd to think you can speculate that far into the future, but the facts are pretty bleak: we're in a bad place. And the main reason unemployment looks like that is because there are so many people who have never managed to get a job yet or have dropped entirely out of the employment rolls.

Over 1,000,000 jobs have been lost since President Obama took office. Every year that goes by without real recovery means those jobs are that much harder to get back. And if those people who are no longer getting unemployment benefits (or never did) were counted, our real unemployment rate would be over 10%. As I've said before, that compares to depression-era numbers (although not the worst of depression unemployment numbers).

Then there's growth. Last year's growth was, if the government is to be believed, just over 1%. Next year the CBO hopes it will be just over 2%, then down again to 1% the following year.

And compounding this information is pressure from government that will make matters worse. I think 7% official unemployment rate is absurdly optimistic given what we're facing in the near future. What's coming is related to what the CBO offers as good news.

This Congressional Budget Office report predicts the debt will shrink and keep shrinking. But then, they said it would shrink by over 2 trillion last year instead of grow by a trillion so that's a bit difficult to believe. They think this will happen because of the increased tax rate as various cuts roll off and changes take place. In total they are saying that tax revenues will go up by 30% because of this change. How? In addition to the taxes for the government health insurance bill, they're assuming congress will end the FICA deduction cut and raise taxes back to Clinton levels.

What they don't seem to understand is that businesses facing heavy regulations and added costs through health insurance and which have taxes suddenly go up by a huge amount will not be growing the economy. They'll be cutting back more, trimming more, collapsing more, and rich people will spend less and find ways to hide and shelter their money.

So that growth in revenue won't be very significant at all. Even President Obama noted that raising taxes in a bad economy is a really poor idea. And even the CBO doesn't expect there to be much growth. Slamming the economy with a 30% increase in taxes means even less growth.

And a President Romney doesn't look like he'd do anything at all to roll back or change the regulatory damage that the Obama administration has inflicted on the US economy. He doesn't seem inclined to get rid of the Government Health Insurance Takeover Act, although he's said he would... depending on who he's talking to. He'll say just about anything except "I was wrong on Romneycare."

So I'm not optimistic about the immediate future at all. We've been in worse shape as a nation, and I grew up in the 70s when we faced about a decade of lousy economy that got worse on occasion just for variety. We got out of that okay. People were talking about the decline of America, how it wasn't going to be a superpower much longer, and so on back then. We got through it, and we'll make it out of this, somehow.

Just don't expect it to be the same country it was.
Posted by Christopher R Taylor at 9:22 AM