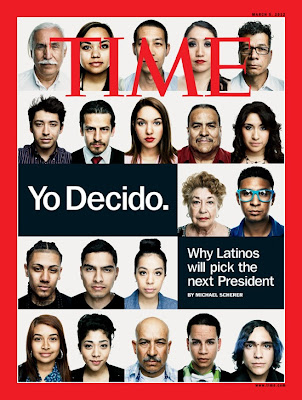 Time, desperate to be relevant and move copies, put out this pandering issue recently with various pictures of people on the cover. They meant to show how diverse the Hispanic population of America is, but they made a little mistake.

See that guy under the "M" in the title? He's got one white parent and one Chinese parent. He's not remotely Hispanic, but they used him anyway cause he apparently looks sort of exotic to the photo editor. His name is Michael Schennum and Time has since apologized for the error.

Schennum says they never asked him his heritage and never said what the picture was for, although Time claims they made sure everyone said they were "Latino" and says they are all registered voters.
Posted by Christopher R Taylor at 7:34 AM

Time Magazine. Horribly irrelevant. "Latino" is a made up group much like the Palestinians.