"The Constitutionally fiddly may object to being required to preserve evidence against themselves, but the Court’s pish-tush principle will take care of them." 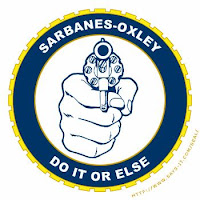 A lot of people threw a fit when the PATRIOT Act was written and passed after 9/11. Having read through the bill and several analyses, it looks to me like the bill is simply an application of the RICO statutes to terrorism. Now, as any mob lawyer will tell you the RICO statutes are questionable to begin with, they basically find you guilty by association, but that doesn't mean its some sort of fascist rule by which doors are kicked down and innocent people are dragged off into the night, never to be seen again.

Its difficult to read even totally unrelated fiction from the mid naughties because every writer seems to have bought into the most paranoid and idiotic rumors and fears of the Bush administration. To believe them, the federal government totally ignored civil rights, reason, law, the constitution, and liberty and simply started randomly picking people out of the street and shooting them against a wall. The law hasn't changed. The policies haven't changed. But now suddenly all that's gone, no one cares any more.

But during the height of paranoia and outcry against the PATRIOT Act, few really were upset about another, far more wide-reaching and outrageous law: Sarbanes-Oxley. This bill was passed in response to financial shenanigans, insider trading, and fraud by big time investors. It was an attempt to give the federal government the power to stop companies like ENRON from totally defrauding their customers and workers, then hiding and shredding information to protect them from the investigation. Basically the entire law is about forcing financial institutions to help investigators in every way possible.

Which all seems fairly reasonable, but there's a problem with this. The federal government has been using Sarbanes-Oxley in a lot of, shall we say, creative ways, particularly the evidence destruction part. Here's the pertinent piece of the law:

Whoever knowingly alters, destroys, mutilates, conceals, covers up, falsifies, or makes a false entry in any record, document, or tangible object with the intent to impede, obstruct, or influence the investigation or proper administration of any matter within the jurisdiction of any department or agency of the United States or any case filed under title 11, or in relation to or contemplation of any such matter or case, shall be fined under this title, imprisoned not more than 20 years, or both.

David Kernell hacked then-Governor Sarah Palin’s Yahoo e-mail account, and was subsequently convicted under 18 U.S.C. § 1519, a provision of the Sarbanes-Oxley Act of 2002, for deleting information on his computer in order to impede the investigation into his accessing of Gov. Palin’s account.

Kernell was sentenced to 1 year and 1 day in jail, and appealed to a federal court, which upheld the conviction.

Now, look, I understand that its frustrating to be a law enforcement officer at any level. Your hands are practically tied, the bad guys seem to have all the breaks. You can't bust a guy just because you know he's dirty, you have to have good evidence, and half the time they seem to get off anyway because of a tricky lawyer and/or a retarded jury.

Consider this line from the law:

in relation to or contemplation of any such matter or case
That's pretty broad, and it reads an awful lot like you can be busted for deleting a file when the law enforcement officers are just considering looking into your case. And that's a serious problem. Its a kind of cloak law, which lets the federal government nail you even if they cannot get evidence. All they have to do is show you destroyed what they think was evidence even before you are charged or informed of the investigation.

And that's just astounding. I can't help but think of the law in which it is illegal to lie to a federal officer. About anything. Normal cops have to be just shaking their heads about that kind of law. This kind of back door law enforcement is shocking to me, the idea that they can arrest you for not helping them convict you seems to be a pretty obvious violation of the 4th amendment:

No person shall be... compelled in any criminal case to be a witness against himself...

They're compelling people to help the cops convict them, isn't that least a violation of the spirit and intent of this amendment? And I can't help but think of the private property protections in the same amendment.

How does this not violate civil liberties and damage freedom? Yes, they're probably bad guys if they are destroying evidence in a criminal investigation. Yes, that's frustrating and annoying - just ask the guys involved in the Whitewater investigations.

But a law about financial institutions being used to nail people in any sort of investigation whatsoever is just really wrong in my book. And laws that are deliberately designed to be as broadly and widely applied as this are troubling, to say the least.

The RICO statutes are troubling enough, although its tough to sympathize with its targets most of the time. Using the law to arrest people for having associated with guys committing crimes is pretty disturbing. Imagine if we could nail politicians for corruption under those kind of laws? Technically we could, if they weren't in charge of the law enforcement officials, under RICO. President Clinton ordered his justice department to arrest abortion clinic protesters under RICO, for example. So there's some reason for concern with the PATRIOT Act, I think.

But Sarbanes-Oxley is an entirely new different law than the PATRIOT Act and its being used far more and in more unrelated ways. This kind of thing has got to stop. It really is a fact that bad laws are usually in response to crisis. Its like making a decision immediately after some catastrophic or horrible event: its always best to wait until you're out of shock and more dispassionate.
Posted by Christopher R Taylor at 10:39 AM

"half the time they seem to get off anyway because of a tricky lawyer and/or a retarded jury."

One in 212 federal cases end with the defendant found innocent.

Nine out of ten cases plea bargain instead of going to trial.

Stop taking the NKVD's side.

As for the rest of it, the Bill of Rights has been effectively inoperative since before I was born, it's only starting to become blindingly obvious now.