OF LOVE AND HONOR

Since the comprehension of sweet sound is our most indefinite conception, music when combined with a pleasurable idea is poetry.
Music without the idea is simply music. Without music or an intriguing idea, colour become pallor, man becomes carcass, home becomes catacomb,
and the dead are but for a moment motionless.
-Edgar Allen Poe, Letter to B- 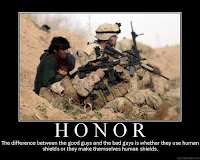 I'm not a big fan of poetry. I like it fine when its accompanied by music, because then the stylized method if writing makes sense: it has to fit the meter of the song. All too often, poetry is pretentious, its writing something in a deliberately obscure method instead of saying it right out and plainly.

People take classes where they read a poem which says nothing deep or makes little sense, then spend hours talking about what it really, actually means in some cryptic fashion only an expert can unravel. Which means it was said very poorly, if that's what the author was doing instead of just writing something they thought sounded interesting.

But there are some poems that truly speak to me, and the advantage of poetry is that often you can quote a few lines and encompass the whole work for someone who knows it. Consider these:
"My name is Ozymandias, king of kings:
Look on my works, ye mighty, and despair!"

Water, water, every where,
Nor any drop to drink.

Into the valley of Death
Rode the six hundred
If you know the poems, or even are just somewhat aware of them, you only have to hear these lines to know the rest. They are shorthand for a longer, deeper concept, and literature has used this principle to great effect in the past. A character drops a line from a poem to explain his feelings or an event and you can grasp a whole world of truth from it.

One such poem I find so powerful due to a specific line is "To Lucasta, Going to the Wars" by Richard Lovelace. His poem is about honor, and the significance of it in a man's life. Honor is a pretty battered and beleaguered concept in modern life. Honor makes modern man sneer and mock, the principle that it is better to lose doing right than win doing wrong is considered stupid and even possibly unAmerican, with our pragmatic culture.
But honor is what makes man greater than a beast, greater than a mere human, and greater than what he too often is want to slouch into. Honor keeps us doing right when all is so hard, honor gives you the reason to go on when all are against you, and honor is what makes you stand tall when others around you slump.

To Lucasta, Going to the Wars is a short poem, addressed to a man's wife as he heads to fight in a war. He is trying to explain why he is going to a woman who declares - as so often has happened in the past - that if he really loved her, he'd stay. Honor, he explains, is why I love you.
TELL me not, sweet, I am unkind
That from nunnery
Of thy chaste breast and quiet mind,
To war and arms I fly.

True, a new mistress now I chase,
The first foe in the field;
And with a stronger faith embrace
A sword, a horse, a shield.

But consider: the man he is, the man she adores and wants to stay, the man she fell in love with and wed, that man is defined by his honor. His honor is part of his character, and its part of what makes him who he is. Loving him means loving that honor, too. And in reverse, his honor and his love of it makes him love her.

The terms are antiquated, the setting is odd to us now, but the sentiment should ring through the ages to every man, and through him, to every woman who loves him.
Posted by Christopher R Taylor at 10:38 AM

I love it, thanks for sharing.

One of my recent finds as I plumb the depths of the Cowboy Poetry genre (which very often turns out to be 'libertarian poetry', as is the case here):

Now...
Bein' a friend of man's the thing,
Or so the poets tell.
I'd rather live back off the road a ways,
And let them go to Hell.

For..
Them folks that drive 'round nowadays,
Don't fit in Foss' plan.
You got to live back off the road,
To be a friend of man.