LOOKING BACK AT YOURSELF

"This woman is as deep as a contact lens"
A woman had some artistic nudes shot of her at age 26 and later, she had some more in the same poses at age 46, to compare how she looks now. She was horrified at the results:

Who is that fat, dimpled, wrinkly, broad-flanked person? That isn't me? That can't be me??!!

And at 5 feet of Fury, Kathy Shaidle says it would take her three years to get over the trauma.

She says about the originals:

She’s a size 4. She doesn’t like her body. She’s broken it down into parts as if it were a car. Some parts are acceptable, others she hates. She thinks she has cellulite on her bum. She thinks she needs liposuction on her thighs. She thinks her breasts are too small. She is me. 20 years ago.
...
I look at this girl now and wonder, “Why did she even wear any clothes? She could’ve just walked around naked all the time!”

Psychologists have come up with a disorder based around feeling bad about your body: "Body Dysmorphic Disorder," as if the natural state of man is happy and content and only someone who needs medical and psychiatric help could possibly be otherwise.

The truth is, as a man, when I look at her older pictures, I have a far different reaction than she does. Look closely at that one where she's curled over with her back to us: 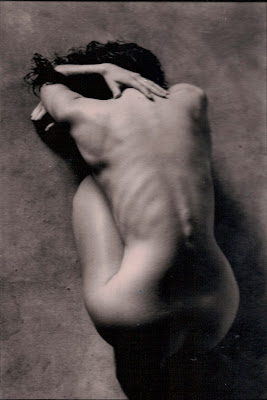 I guess she saw cellulite there, but you know what I see? Bones. You know what I don't want to see when I look at a girl? Her skeleton. That's not pretty, that's not sexy, its sort of frightening and disturbing. She's too skinny. I cannot work out this need to starve yourself into an unhealthy display of skeletal structure among women.

Here's a question for you: how many guys pressure you to look this way? Has a guy has ever said to you "baby I'd love you better if only I could see your ribcage." Stop doing this to yourselves. When I was young, I was skinny, not lean, but almost skeletal. In college I was about 6' tall and weighed just over 120 pounds. I could do pullups practically until I got bored, because I weighed so little. My legs were almost skeletal. I wasn't unhealthy, I was just really thin until around age 28, when I started to really fill out.

If you're that way naturally, go for it, that's you. If you're not, then go for that too. Because miserable and self-obsessed is not attractive. If you're eating donuts and pasta all day long, sobbing with your hand in a box of bonbons, then you clearly have a problem but if you eat well and get some exercise, yet still are curvier than the women you work with think you should be, the hell with them. Be you. If you're healthy and happy you don't need to lose weight.
Posted by Christopher R Taylor at 8:37 AM