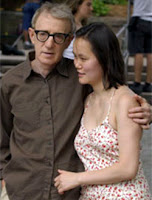 Here's a weird legal puzzle. Incest is defined as sexual activity between family members. Adoption can make you a family member. So the question is... is it incest for a man to adopt his lover? That's what a case in Florida has legal types wondering:

Believe it or not, there is a growing trend in this country of adopting one’s adult lover or spouse for various reasons: to better guarantee the adoptee’s right to inherit directly from the adoptor; to keep other relatives from having any standing to contest an estate plan; or, as in Goodman’s case, to add a spouse or lover to a class of trust beneficiaries, allowing the “child” to inherit from the “parent.” Courts around the country are struggling to figure out whether these adoptions should be upheld or not.

Its a pretty good system; a child cannot be legally cut out of a will, except by the person writing it, but a newly married spouse or lover can be. So when Goodman fell in love, instead of marrying the mistress, he adopted her. From the girl's perspective, this actually is better than marriage, because he can't divorce his daughter. But from a legal perspective... isn't this incest?

Florida law states that for incest to take place, there must be "consanguinity," or direct blood relationship. So this guy can skate on the incest charge, most likely, as can Woody Alan. However, there's a hidden aspect to this question which is more significant than just a curious legal event.

Gay men have been using this trick to get their lover legal benefits and protection for years. Now while you and I might cringe and go "eww" at the idea of sleeping with your now-child, I guess that's not something that bothers folks like this.

But extend this a bit further. Adoption is a legal structure to control and recognize a family addition, just as the legal marriage is one to recognize and control wedding. Homosexual "marriage" is being pushed pretty hard, even though it only affects a tiny minority of a tiny minority of citizens. As I have brought up before on this blog and elsewhere, nothing stops a couple from being married for reasons other than love and relationship. Marrying to get citizenship, for instance, is not unheard of. Marrying to protect someone or give them financial stability is ancient.
Homosexual "marriage" open this up enormously. Marrying your room mate to just get around taxes and help with legal matters is a perfectly reasonable and not unexpectable result. Marrying your best friend or a person you mentor to give him the ability to control your assets in an emergency or in death is fairly predictable. There are lots of ways this can and absolutely will be used that have nothing to do with homosexuality. Marrying business partners, for example, would be an unusual but plausible way to control and protect a business' assets. Marry someone who's an illegal alien, male or female, and they are now a citizen, which could be awfully useful for a business.

When the concept of marriage is thrown out to appease a small number of people for political reasons, then the door opens up for far more problems than initially considered. The entire principle and meaning of marriage becomes totally corroded, and in a predictable way. Instead of being the basic building block of civilization and culture, it becomes a legal attachment with no particular meaning.

One commenter at Volokh Conspiracy, where I first saw this, noted some unfortunate parallels between the US and ancient Rome:

What is interesting to a historian is that Roman morals are rapidly being adopted. Of course no-fault divorce was not a Roman invention but a Roman practice. So was the adoption of adults into other families, primarily for financial reasons. There were no Roman laws against abortion; in fact, the Roman father had a perfect right to kill his children if they displeased him, giving late-term abortions a new meaning (post-birth abortion?) that is sure to be upheld as a Constitutional right by the Ninth Circuit, if not the Supreme Court, in the near future. Homosexuality was not high on the Roman acceptance list but neither was it illegal. In fact, a number of Roman emperors and dictators (Lucius Cornelius Sulla) had male lovers. Colleen McCullough has a wonderful series of novels (referred to as the “Masters of Rome”) depicting life in Rome near the end of the Republic and the beginning of Imperial rule depicting with accuracy the manners and morals of that time and place.

We are reminded that there really is nothing new under the sun. The practices, morals and laws that our Liberal friends believe are new and groundbreaking are nothing more than a reversion to some of the most ancient cultural attributes that western civilization outgrew and, a mere 50 years ago thought were long discarded as part of a cruder, ruder pagan time.
-Here Come The Judge

Basically when a civilization abandons the virtues and traditions that built it to the point it reaches its height, then it inevitably, rapidly declines. And these civilizations usually do it to themselves, and its academics and lawyers who lead the way.
Posted by Christopher R Taylor at 11:08 AM

Another way to put it is that as American society becomes more and more dechristianized, we are adopting the mores of the pagans