"Does he despise conservatives so much that our very presence on a side of a topic sends him running for cover?" 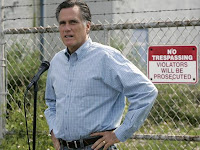 Recently Mitt Romney made the first mistake of his campaign, which was inevitable; no one can run things perfectly. President Obama makes plenty of mistakes, they just don't tend to hurt him because the press just ignores them and won't talk about them. You've probably heard or read about it, basically he told an interviewer he was more interested in the middle class than the poor, and she ran around saying "Romney said he doesn't care about the poor!"

This is not a major mistake as they go, its just the press working a statement to his detriment now that they figure he's got the nomination in hand. But it has hurt him some, and it helps play into President Obama's class warfare campaign. To try to fix the damage he thinks this caused him, Romney immediately ran out and announced he wanted the minimum wage to be automatically adjusted upward with inflation (naturally, never downward with deflation).

The question is why he'd do it? Of all places, ABC News gets it right; Rick Klein writes:

But to many a conservative ear, that soundbyte wasn’t the worst part of his answer. That fact speaks to the difficulty Romney will continue to have in wooing his party’s conservative base – and provides a window into the animating philosophy of a candidate who’s running on his Mr. Fix-It credentials.

The part that really grated on conservative activists and thought leaders was his rationale for why he’s not particularly concerned about the plight of the poor. Romney went on to explain – and explain, and explain as the day went on – that the poor are and should be taken care of by the “safety net” of federal programs.

As Charles Krauthammer says, “The real problem here is that he doesn’t have a fluency with conservative ideas... The moral case for conservative economics is that our policies are going to help everybody, including the poor.”

As I've said here and elsewhere, none of the GOP candidates honestly comfortable and conversant with conservatism. They seem to be third hand conservatives, having heard about a few ideas that sound good but without personal real deep understanding, even Sarah Palin. They know some parts, and the others they have to guess or ask someone about rather than truly having that worldview and the study and thought to draw conclusions on their own.

So, when asked something they aren't exactly comfortable with, they wing it, and their instincts are often wrong.

But there's more to it than that. A few days ago, Rusty Shackleford at the Jawa Report wrote all about electability and moderates:

Reams of survey data show that independents are the least likely to know anything about a candidate's policy stances. Instead, these independents vote on things like "leadership", "integrity", and "strength".

In other words, they have no idea why they are voting for who they vote for. Mostly they just vote for the guy in power if they think the economy and country are doing ok, vice versa, and if they are indifferent on that point they look to other cues -- very few of which have an actual relationship with what the politician has done or is promising to do beyond vague notions that every one agrees on such as "creating jobs", "making America strong", of "building a brighter future."

As Maetenloch puts it at Ace of Spades HQ: "The 'independents' - God bless their blissfully politically ignorant souls - could care less about the issues and all the details we obsess on." I read this kind of thing a lot in election years, and there's something to it. Most people don't have the time or inclination to learn much about politics, economics, and foreign policy. They barely know what their neighboring state is like. And they like it that way. But it makes them lousy voters.

Chances are if you read this blog, you're significantly more informed and politically astute than the average bear. That's why I had a push in 2008 for people to vote on this blog when I tend to think we'd be better off if fewer people voted. That sounds like a contradiction until you think it through: I want fewer uninformed, apathetic people to vote. If they don't care enough to find out about the issues or learn anything, I'd rather they just stayed home. But if you do understand the issues, I want you at that polling place.

The average voter is not concerned with principles of conservatism or leftist ideology beyond phrases and terms they've been taught to like or dislike by popular media and peer pressure. They don't really understand that lower taxes tends to increase government revenue by simulating economic growth, they just like not paying as much in taxes. They don't know how raising the minimum wage beyond a certain point actually hurts the poor, they just feel bad that some poor sap is trying to raise a family on minimum wage.

So they will often tend to be more swayed by things such as charisma, looks, and so on. The name of a candidate makes a big difference. Say "President Kucinich" out loud. It just doesn't work. The same thing with "President Huckabee" or "President Dukakis." That doesn't sound like a president, it doesn't feel American and historical, it sounds weird. And without thinking about it, people let that influence them. Well that doesn't sound like Lincoln, Clinton, and McKinley, he doesn't seem presidential to me.

And that's what Mitt Romney is aiming at. He's not running on ideas, policies, or his superior ability to do the job. He's running on that nebulous feeling that voters get about a candidate. His hair is right, he looks presidential, he's got that voice, he always has the right look on his face, the right pose, the right gestures. He uses the right words and the right pacing of his speaking. He seems like a leader, if all you're looking for is seem.

So when he was asked about this issue, he tried to hit a topic off his list: the middle class, which despite hysterical claims by the left is the largest voting bloc in America by far. The poor are a small portion of America, and many of them do not vote. So he doesn't care to target them with his comments, he targets the voters he cares about.

So that's why Romney himself doesn't tend to attack anyone (nor does Obama himself). They send out minions, lackeys to do the attacking and stand with a gaze off into the middle distance, head slightly raise and turned a little to the side. It looks great on camera. He's so thoughtful and visionary, he's noble and a great leader, look at how he's posed!

Romney's entire campaign is about this. He's shameless about it. If you ask him anything, he'll say what you want to hear, even if he just said the opposite. And he gets unhappy if you call him on it and sends his attack dogs out to tear you down for daring to do so. Both Obama and Romney are running exactly the same sort of campaign.

And I think America is sick of this crap, to put it bluntly. I think it works the same way advertising works. I think its effective, but isn't lasting. People quickly tire of it, they're pulled in to support it, but at the same time find it distasteful and unpleasant. Its too contrived, too carefully packaged. Too much demographic research and coaching went into it.

But it appears that this is the only way a president can get elected now. They've spent 30 years working out the perfect way to campaign and now we're seeing the slickly packaged media consultant results. We get vapid, meaningless candidates without integrity, honor, or personal strength who are fantastic campaigners, but have nothing to offer on the job. President Bush was an aberration in this, a reaction to genuine revulsion with the Clinton presidency, but even he was carefully managed with terms like "compassionate conservatism."

Every so often we'll get a guy like Ronald Reagan who can do this, but still has a core of beliefs and ideas. He can articulate what he believes in and why in a winning and attractive way, then goes and governs that way. Such a man is incredibly rare. And the more we reward the Clintons and Obamas and Romneys with success while shunning people who won't fit that carefully massaged media profile, the more we'll get the empty suit who poses well and handles himself perfectly but can't do the job.
Posted by Christopher R Taylor at 8:37 AM