"I think religion should never receive that level of protection or sensitivity." 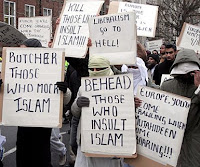 Recently BBC chief Mark Johnson admitted that Christianity gets less sensitive treatment than "other" religious. This is borne out by the sort of programming that BBC runs, such as a show mocking Christianity and showing Jesus in a diaper a few years back. Some complained, noting that the BBC would never run a show disrespecting Muhammad in such a way, for example.

In a display of momentary honesty, Johnson also admitted that, courtesy Paul Revoir at the Daily Mail:

He suggested other faiths have a ‘very close identity with ethnic minorities’, and were therefore covered in a far more careful way by broadcasters.

But he also revealed that producers had to consider the possibilities of ‘violent threats’ instead of polite complaints if they pushed ahead with certain types of satire.

In other words, Christians are safe to attack. They are perceived as being white and unlikely to harm you for upsetting them (or as he puts it, Christians have "broad shoulders.") Which is true: you're much less likely to have your office bombed or burned if you anger Christians, and Christians are typically much more tolerant of attack and mockery than Muslims - its part of the code to turn the other cheek and expect abuse as a Christian.

But this does highlight something you've probably been aware of for a long time in the news. Think back to any crime news you've seen in the past. When the person arrested is identified, they always use the words "alleged" and "suspect." The guy could have been caught on 51 different independent cameras hacking apart an old lady on the street at random, bragging about it the whole time and admit he's guilty repeatedly on record, but he's still called alleged.

Why? Because its policy in every news organization on earth, due to the fear of lawsuits. Being unhappy at a news office they sort of giggle at and enjoy. Being unhappy and threatening something they care about - their money or their lives - and they will adapt to your point of view.

They'll try to cover it up in terms of sensitivity and racial concerns, couched in the usual language of multiculturalism and political correctness, but it all comes down to the same thing: fear and capitulation. One group will yell, the other will yell and hurt you. And despite the bragging about courage and the films of noble, daring reporters facing down all danger, the profession is basically craven. They'll cave if they really are genuinely threatened.

Which essentially ruins the validity and utility of news broadcasting. There's still some value there, but you know for certain that if a news organization or reporter feels sufficiently intimidated, they'll change their reporting. And that goes a long ways: feeling like you're being left out of a group you want to identify with or admire can make reporting change too. They'll go along with the pack, not rock the boat of their friends.

I don't know as I'd be any different in their place, but then I don't present myself as a bold arbiter of truth and crusader out to change the world, and I don't mock people for "Islamophobia," either.
Posted by Christopher R Taylor at 7:36 AM