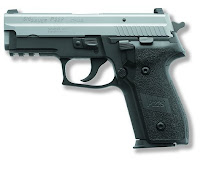 On January 23, Washington DC resident Emily Miller decided to buy a gun. She picked out the Sig-Sauer P229 after some study and advice, and went to get it.

Now, if she was a criminal, it would take her perhaps a day to find someone, then five minutes and some cash to walk away with her new weapon. But since she's a law abiding citizen who wants to do what's right for some protection against the criminals it was a bit more complicated.

As I wrote back then in a WATN roundup, Washington DC only has one gun seller, and he has to buy them from outside and have them shipped in. But that's only the beginning of her difficulties.

First, she found out that the pistol has a 13 round magazine but the city only allows a maximum of 10 rounds. So she had to get a special box magazine that only carries 10. And to get that gun in her hands, she has to get a registration certificate. Emily explains what that entails:

In order to get this certificate, I still have to do the following: take a written test on the city’s firearm laws; get Mr. Sykes to fill out the application form; have the eligibility form notarized; get two passport photos and prove that my eyesight is better or equal to the driver’s license requirement (20/70 in best eye and field of vision of at least 140 degrees).

Next, I have to take all the forms to the registry office; pay $60 in fees; wait five days for the application to be approved; wait an additional five days for Mr. Sykes to be able to release my gun; and take the gun to the police for a ballistics test.

Unlike much of the country it is illegal to actually carry a gun in any manner (open or concealed) unless you're a law enforcement officer. So you can have a gun, you just have to keep it in your house or can prove you're on your way to a shooting range (or back).

The only gun shop in town could only get one place to sell guns: in the same building as the police station. But since he can't receive regular mail there, he has to get it shipped to him through a carrier such as Federal Express. The gun Emily bought was from a company called Immortal Firearms, and he figured that since he was nearby he'd just drive it in. As it turns out, he can't:

After sorting through the D.C. gun laws, Mr. Attanasio called me back. “I’m a FFL [federal firearms license] licensed dealer and I can’t drive it into the city to Sykes, another licensed dealer,” he told me, astounded. “But I can send it to him and pass through who-knows-how-many unlicensed hands.” I'm watching first-hand how gun-control restrictions aren't based on common sense.

And you can only own one gun. You can't sell or pawn it in the city. You can't carry another one into or out of the city. If you want to obey the law, at least.
So Emily has the gun shipped to the only gun dealer in town, who doesn't buy or sell guns, he only takes shipments of guns and helps with the paperwork. She had to take a 5 hour class costing $250, then get a form filled out by the only gun dealer, take that to the police station to have it checked to see if the gun is legal and allowed in the city. So you might buy the wrong gun, pay for it, pay for the class... and have your gun seized without refund because its not legal. There was an additional cost, too, since the gun dealer Sykes charges $125 for his taking the gun and filling out your paperwork.

Then Emily had to take a test. Then she was fingerprinted, the gun was put through a ballistics test and filed, and she paid $60 more dollars in fees. She had to show two passport photos. Then, she had to wait ten days for a "cool down" period in case she was buying the gun in a fit of rage, waited weeks to get it shipped to her, and spent all day taking tests and waiting.

Frankly the seven days left of cooling off is just getting me more fired up about D.C.’s gun-control laws.

And to top it off, every six years, Emily has to return to the police station to get re-fingerprinted and every three years to renew her registration, paying the fees every time.

She was given a registration, which Emily always has to carry with her gun. Finally, she got her gun, and summarized the process this way:

The bad guys buy guns off the street in five minutes, and the city has no record of the transaction. Law-abiding citizens have to take a five-hour class that is only taught outside of the District, pay $465 in fees, sign six forms, pass a written test on gun laws, get fingerprinted, be subject to a police ballistics test and take days off work.

Five minutes and no fees for an illegal gun. Weeks and almost $500 in fees for a legal gun. Which option do you think most people in this city are choosing?

Next up... she has to figure out how to get ammunition shipped to her in the city.

The theory behind all this is that if they make it as painful, slow, byzantine and difficult as possible to buy a gun, then they'll keep guns off the streets. You can almost hear the city councilmen saying "let's see you get a gun through that you bitter, clinging gun lover!"

Unfortunately, if you make doing something legal so uncomfortable and miserable, the people are going to be more inclined to do it illegally. The only people you're hurting here are folks who are poor and want something to protect themselves with, people who want to do what's right and obey the law. It costs close to $1000 to buy a gun to begin with, and this process adds another $500 or so to the price.

Small wonder people go find a gun for cheap on the streets, a hot one that's of dubious quality. Washington DC, in its manic effort to stop gun crime and shootings in the streets - which it has at levels higher than almost any city in America, despite the draconian gun laws - is simply encouraging people to break the law even more. They're effectively making it illegal to own a gun in a nation which ensures all citizens they have the right to keep and bear arms.

Remember, the primary reason the founding fathers wanted this right protected in the US Constitution was because an armed, strong citizenry is, in their opinion, the best protection for liberty that man can hope for. A government that fears its citizens is much less likely to implement tyranny, or even be able to attempt it.

Which suggests why these laws might exist in a place like Washington DC.
Posted by Christopher R Taylor at 8:31 AM

That's the sort of thing that might make somebody want to relax with a small shooting spree.