"American females are whining and litigating themselves into spinsterhood." 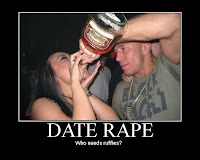 So there's an advice column online called Dear Prudence, and in it the topic of date rape came up and from that a discussion of consent, drunkenness negating consent and so on developed at the site The Frisky (a female interest web magazine). Its in the comments where things get interesting, though, and Glenn Reynolds puts it this way at Instapundit:

So if a man gets drunk and sleeps with a woman he wouldn't have slept with sober, it’s humorous grist for jokes about “beer goggles” and “coyote ugly.” But if a woman does the same thing, woe unto anyone who suggests it wasn’t “date rape.”

For instance, there isn't really a name for a guy who marries or dates for money and comfort, but there is for women (Golddigger). On the other hand, we're told all the time in movies and books that women like a guy who won't give up and eventually he wins the girl and she loves him for his persistence, but in real life, he's probably going to be called a stalker and hauled before a judge... unless he's handsome and rich.

Its kind of like the sexual harassment versus flirtation distinction. Its flirtation if the girl likes the guy or considers him a good potential mate, but if he's a loser, ugly, or has no future, then she will often say its harassment. The behavior isn't at stake here, its whether she welcomes the behavior or not. Telling a woman her dress really flatters her can either get you a smile and potential date.... or fired, depending on how she perceives you and the workplace.

It isn't that I'm opposed to double standards, its idiotic to think that everything has to be equivalent between men and women. Women ought to be more protected than men, who are better on average at protecting themselves. And if people wouldn't sleep around the beer goggles/date rape one wouldn't ever come up.

Its that every man sees this and wonders where the justice is, and how on earth we're supposed to navigate this apparently random and arbitrary minefield. Small wonder guys are much less interested in long term relationships: less potential for unforeseeable damage.

But I have to confess, the whole concept of "date rape" is a bit confusing to me. Is this like Whoopi Goldberg's ghastly "not rape rape" comment in defense of Roman Polanski? When is rape not just plain rape? If you say no and he does it anyway, isn't that just... rape? And if you said "yes" just to shut him up or because he was really persistent, (many a wife in history has done just this) how is that rape? Where does this extra double secret classification come from, this special category of rape that's not as bad but still must be punished?

From the Frisky column we have this attempt to explain:

Despite learning about this situation third-hand, it is clear to me that this woman did not offer “enthusiastic consent” to have sexual relations with this guy. Enthusiastic consent is predicated on the idea that consent is not about the absence of a “no” — which, of course, cannot be given if person has indeed been roofied or is too drunk/too drugged to voice consent. It’s about a clear “yes.

So now she has to be enthusiastic or its rape? I can't see how drugging a random person without the date and having sex against her wishes is any different than doing the same thing to a person after some drinks and a movie. Does the attempt at getting permission make the act any less horrible?

And as a commenter brought up, if its rape to have sex with a woman who is too drunk to think straight, what about the guy who's almost certainly just as drunk. Didn't she rape him too?

Feeling guilty after having random, meaningless sex is normal and right, as it turns out. You should feel shameful. Don't blame the other person, though. That's what the guy's "beer goggles" and "coyote ugly" lines are about. They're blaming themselves, taking responsibility for what they did - a rare thing for men these days. Its a guy saying "wow if I was thinking straight, I'd have never done this."

And some women tend to never want to take responsibility for anything so they're looking for ways to blame someone else for their poor choices and behavior. Consider this story, which sounds all too plausible, from the comments:

Girl and guy live on same floor in dorm.

Girl on tries to friend guy on FB. He rejects twice because he doesn't know her.

They meet f2f finally through another friend.. Then he accepts friend request.

They have a few flirty discussions over mail. They switch to texting.

The first friday after their discussions, she texts him that her room mate is gone for the night and to come over.

She texts hourly asking if he's coming over, along with more flirty talk. At one point he jokes he's only coming over if there's sex. She says she doesn't do that. But come over anyway.

Finally, at 1 AM he says OK, he'll come over, jokes again about getting some action. Asks specifically "what room" as he doesn't know, she tells him and tells him to be quiet as RA is next door.

He knocks on door, she opens in pajama bottoms and short shirt and no bra. They are kissing within a minute. AFter 15 minutes, his hand is in her pants. The sound of key in the lock. They both sit up and separate. Room mate wants to know "what the hell is going on, as guys aren't to be in the room at this time"

The guy says "See ya" and leaves.

The next day he's met by campus security after a class. They want him to write down everything that happened. They won't tell him what is going on.

They type up his statement, and ask him to sign what happened. One of his friends has a dad that is a lawyer, and he says "Just know that whatever you sign could be used by the police if this turns into a criminal investigation"

He rightly panics, and decides to get a lawyer.

The school says no lawyer is allowed at these hearings. They deem him unco0perative, and the hearing is held without an official statement from him. Nobody at the school is interested in seeing the text messages pleading several times for him to come over.

At the hearing, the girl specifically said she didn't expect to see so much seriousness in all this. She just wanted the RA or someone at the school to tell him his behavior was wrong.

Within a week, he's given a 1.5 semester suspension, effectively killing his freshman year. The tuition, housing, etc, is non-refundable.

The presumption of guilt in men by modern society is almost absolute. At college, the desire to protect female students and the consideration of women as an oppressed victim is so absolute that men are simply disregarded, their say is irrelevant.

Now, again, I'll say that its men who are to blame for this situation - largely emasculated Alan Alda types who run universities, but men - and men who have to take charge and fix it, but the truth is, modern society is so hostile to men its no surprise that men are just removing themselves from it by staying permanent adolescents. You can't blame me bro, I'm just a hard partying kid!
Posted by Christopher R Taylor at 9:14 AM