"Courage has no color" 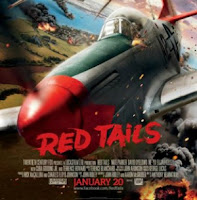 One enjoyable movie I watched a while back is the film Tuskeegee Airmen which told the tale of the first black pilots to fly in World War Two. It was a sort of pet project of Mrs Roosevelt, in which she tried to help desegregate the military through the Army Air Force. These young black men were trained to fly fighter planes and eventually went on, though great courage and facing great bigotry, to protect planes from Nazi attack. The end of the movie tells us how once they finally were allowed to fly, not a single bomber was lost while under the protection of the red tails.

The airmen were asked what special paint job they wanted to indicate which planes were theirs and they wanted the entire tail painted red, not just a few stripes. Thus the name and they were instantly identifiable. Because they were so good, the bomber missions started requesting the red tails.

Its an amazing story of courage and determination, and its a great part of history to learn about which isn't widely known. Recently George Lucas made another movie called Red Tails about this very story. Outside the National Air and Space Museum in Washington DC there's a permanent display of the Spirit of Tuskeegee, one of the planes that flew in the squadron. Almost every major airport and Air Force base has a display or special memorial to these pilots. Many cities even have streets named after them. Its quite a story.

The problem is... its not exactly accurate.


The Tuskeegee Airmen was an all-black fighter squadron in World War 2, and Mrs Roosevelt did help them organize and actually see service. They were quite good - which you'd expect, since like Jackie Robinson, they had to be the best of the best to even attempt to get any air time.

The problem is, they did lose bombers. Twenty-five bombers were lost, unfortunately. That's not a very big number, and they did protect most of the planes the escorted, but they did lose some. In fact, the Tuskeegee Institute founded by Booker T Washington to educate blacks has a file up telling nine myths of the airmen.

Another myth that's cropped up is the one that one of the airmen got an "ace" (5 enemy plane kills) but never got credit. The problem is, the actual records show he only got four kills and got credit for all of them.

The Tuskeegee Airmen were not the first to shoot down German Jets, either. That distinction goes to 1st Lt. Eugene P. McGlauflin and 2d Lt. Roy L. Scales, of the Fifteenth Air Force’s 31st Fighter Group and 308th Fighter Squadron on December 22, 1944, they shot down the first ME-262.

And finally, not all of the Tuskeegee Airmen were black. All their top level officers were white, and the squadron had all white flight instructors, for obvious reasons, until later when experienced pilots could take over these positions.

None of that takes away from the accomplishments and difficulties of these men. They faced real bigotry and real prejudice, they faced real Germans and escorted real bombers and worked on real planes. They were heroes if for no other reason than they fight against a hideous evil in World War 2 and saved us from brutal tyranny. They're just as much a hero as the white guys, in my book. Which to some takes away from their greatness, so much so that they promote and repeat myths.

As if just being a fighter pilot in WW2 wasn't enough.

This is part of the Common Knowledge series.
Posted by Christopher R Taylor at 8:14 AM