Tin Soldiers and Nixon's coming
We're finally on our own
This summer I hear the drumming
Four dead in Ohio
Neil Young, "Ohio" 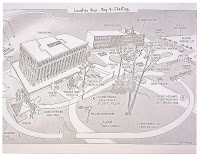 One of the pivotal moments in the anti-war history is the Kent State Massacre in which peace loving counterculture teenagers at Kent State University were gunned down for a full minute by national guard troops sent by Richard Nixon. Hippies were viewed with skepticism and dislike by much of America, but once this event took place, the general population felt more sympathy for the movement and outrage was felt by all.

Or so we've been told. However, there are a lot of problems with this narrative. It was fairly pivotal and the event did generate a lot of sympathy, but the rest of the story is full of holes, misinformation, and distortion.

For example, it wasn't Richard Nixon who sent the troops. As President of the United States he has little control over the National Guard in each state, and it was actually governor Rhodes who ordered the national guard in, Nixon was only tangentially, distantly involved with the events.

To understand what happened, you have to dial back the clock several days before the shootings. On April 30 1970, President Nixon announced that, in order to stop the North Vietnamese from using Cambodia to move troops into South Vietnam, he was officially sending troops in the nation to deal with the Ho Chi Minh trail.

The following day, protests erupted around the nation by students who opposed the war, feared escalation, and mostly feared being drafted and forced to fight in Vietnam. Kent State held protests on March 1, including bonfires built in the street. One student burned the US Constitution to protest that Nixon was doing just that (somehow). Another burned his draft card.

That night, violence started in town. Bottles were thrown at cars, storefronts were broken, a bank window was smashed, and vandalism spread through town. The police tried to restore order and had bottles and rocks thrown at them. Bikers and local transients joined in the violence. Kent Mayor LeRoy Satrom declared a state of emergency, shut down all of the town's bars, and the police forced the protesters off the streets onto Kent State University's campus with tear gas.

The next day, the National Guard showed up. Downtown businesses started receiving threats from protesters. Governor Rhodes compared the violent protesters with Communists, Brown Shirts, and KKK riders in their efforts to destroy civilization and intimidate people. Some students went into town and helped businesses clean up the mess.
That day, protesters estimated to number more than a thousand surrounded the ROTC building and lit it on fire. Firemen attempted to put out the fire and were pelted with rocks. Hoses were slashed on fire trucks to prevent them from extinguishing the blaze. The building burned down. Other buildings on campus had windows broken and furniture thrown about and damaged.

The students tried to continue protests, now less about Vietnam and more about alleged police brutality and the "fascist" governor. They tried to hold a "sit in" to force the governor and mayor to talk to them - to what end isn't exactly clear - and they were dispersed by the police and national guard. One student alleges that he was bayonetted by the National Guard in the process.

On the 4th of May, students gathered for another protest rally, and were told they had to disperse or face arrest. Rocks and bottles pelted the man giving the announcement and he retreated as the crowd chanted "pigs off campus."

Attempts to disperse the gathering failed, partly due to high winds which made Tear Gas ineffective. Some of the students threw the gas canisters back at the guardsmen. 77 national guardsmen, with bayonets fixed, advanced on the protesters, who began to move as a group, partly dispersing while throwing objects at the National Guard.

Careful analysis of the audio tapes of the event has some claiming the crowd chanted "Kill! Kill! Kill!"* Also revealed was an event in which four pistol shots were fired and a violent confrontation took place. Then, over a minute later, the National Guard opened fire with M1 Garand rifles, and the squad leader with his pistol. Four students, two of which were said to be not part of the protest, were killed. A fifth was permanently paralyzed, and eight others were wounded. The troops fire for 13 seconds and stopped. fewer than half of the guard fired, expending 67 total bullets.

The Guard said that they felt their lives were in danger, so they opened fire. Bunched together in a tight group and outnumbered by several factors, they probably did feel nervous and in danger.

Here's where it gets hazy. Students claim that the troops knelt in formation like Revolutionary War soldiers and fired volleys. Troops claimed that they were taking fire from a sniper. Students claimed the firing went on for as long as a minute. The audio tape is apparently awful and difficult to hear, but some experts claim that the Guard received specific orders to open fire.

The problem we have is that the press by 1970 was almost uniformly in support of the students and the anti-war protests. The myth of the peaceful hippies handing flowers to evil fascist national guard has grown so great that today its very difficult to even get someone to listen to an alternative.

We have cell phones with cameras all over the place these days, but in 1970 a kid had to hook up a reel-to-reel tape machine and stick a mic out the window to get any recording at all. The students were full of, shall we say, creative interpretations and stories of the events, and the National Guard was in full butt-covering mode, trying to justify what happened. So both sides had an agenda and its difficult to know for sure what happened.

I strongly doubt they had to fire on the unarmed students. That was taking their role too far. They probably overreacted out of fear, intimidation, and feeling surrounded and alone. But the students were hardly blameless as well, and the work for decades now to create this myth is very frustrating.

And what you get from the popular culture, the press, and academia promotes this myth uncritically from a mix of personal ignorance and the value of this narrative to the "cause." The Occupy movement, thanks to the new media and the Ubiquity of cameras never got the momentum the hippies did but they were virtually identical in method, behavior, and the vile activities and crimes. The big difference is that today the news isn't as controlled by friendly sources and they can't control what is reported and known.

*UPDATE: as a commenter noted, the tapes are difficult to hear clearly and the audio is not certain, so I wanted to clarify that.

This is part of the Common Knowledge series.
Posted by Christopher R Taylor at 9:40 AM

"Have you ever read a news story about yourself or something you know about very closely?"

In the spring of 1994 a college buddy and I went on a hike in the mountains around Gunnison, CO with some friends. It was getting late and everybody was ready to turn back. My friend and I wanted to keep hiking so we looked at a map and identified a route we could take that would put us on the highway our friends would be driving down on their way home from the hike. We told them we'd meet them at the highway and they could pick us up. Then we gave them the map.

Then we missed the side trail we were supposed to take. Then it got dark. Then it got cold. Then we got completely lost. Then we both fell into the water and got soaking wet trying to cross a stream on a fallen log. We had no food, no light, no shelter, no survival equipment of any kind, and only one coat that wasn't very heavy. We were in a bad way.

We wandered around all night, trying to get to a high spot where we might be able to get our bearings... but when we finally got to a high spot we realized that the wind made the sub-freezing temperature even more unbearably cold, so we had to hike back down from there.

We ended up catching a couple hours sleep huddled under evergreen branches we had stacked up for a shelter, trying to share a light jacket as a blancket and pretty much snuggling with eachother in an embarrassing way to try to share and preserve precious body heat.

We were up at first sunlight, climbed back up to the high spot, immediatley got our bearings and spent the next three hours hiking cross country, finally picked up a trail that went back to one of the main trailheads, and back to the highway from there, where there was a Search and Rescue van with two college kids literally taking a bong hit in the front seat.

We alerted them to our presence, they told us our friends had reported us missing the day before, they gave us some hot soup and took us to a doctor who said we both had a case of mild hypothermia.

The next week, on the front page of the college paper, was our picture with the following caption: "SEARCH AND RESCUE TEAM RESCUES LOST HIKERS".

I've hated reporters every since.

There are all kinds of problems with this article, starting with the straw dog argument its anonymous author created. The most serious errors are the claim that the words "Kill, kill, kill" appear on the tape of the shootings (the tape actually disproves this) and the claim the shooting lasted a full minute. The Ohio National Guardsmen fired for 13 seconds. In fact, there are two books on the subject titled "13 Seconds." Also, neither the press nor the general public stood up for the victims. In my book "Four Dead in Ohio" I noted the overwhelming public approval of the killings and the severe backlash against the protestors. I also called the tragedy the most popular murders ever committed in the United States.

Correct, the shooting didn't last as long as people claim - I noted that later when I wrote "The troops fire for 13 seconds and stopped."

By the way, my name is at the bottom of the article, its not anonymous.

The analysis of the tape is mixed, some claim that the tape even supposedly has the commander giving the order to shoot, but that's been since debunked.

IN any case, if you ask 100 people about the shooting, 99 today will say that it was the evil guard gunning down peaceful protesters, whatever the immediate reaction of the public was.

Since the guardsmen didn't shoot first, I'm not sure you can call it murder in any case.