WHAT IF OBAMA LOSES?

“When we ground out our cigarettes in the hallway carpet or set our stereos so loud that the walls began to shake, we were resisting bourgeois society's stifling constraints.”
-Barack Obama, Dreams of My Father 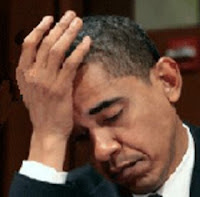 President Obama is almost sure to lose the presidency at this point. The Democrats are gleeful about the carnage in the GOP Primary but what they don't seem to understand is that anyone who makes it through this meat grinder will be ready for attacks and all their bad luggage will be in the open and people will be past most of it, if not all, by September.

Further, President Obama has horrible polling numbers, a lousy economy, and the reason he was elected to begin with - hatred of the Republican party and starry-eyed support of the idea of a black president and slogans people cheered for - are utterly gone now. All that's left is a lousy candidate who has made so many speeches people are sick of him by now, negating his only real strength. He shouldn't win - but then he shouldn't have won in 2008, either, by all previous political experience.

So its not all over, but it looks that way at this point. And if President Obama loses in November, that will mean some real changes in Washington DC. Washington Monthly recently asked various journalists and pundits what they thought the result of an Obama defeat would be. Here are the answers they got:
In all there are eight different responses, each of which signals major change and reversal of President Obama's agenda and legacy. I really don't agree with most of them.
To begin with, history teaches us that once a policy or agency, law, or major decision is made in Washington DC, it stays. It doesn't even matter how awful the decision is, it just lingers on and on and on like a horrible slow growing cancer in the heart of America. We still are paying taxes on telegraph lines to pay for the Spanish American war which ended in the 19th century.

Second, the Republican Party is notoriously weak kneed when it comes to rolling back Democrat policies. They tend to be so out of a good old boy's approach to politics (which the Democrats have abandoned years ago) where you treat your opponents as one of you, even if they disagree. They tend to be so out of fear of being portrayed horribly in the press. And I suspect they tend to do so because they're surrounded by leftists and Democrats in the capitol and feel weird and are easily swayed to abandon what they previously ran on.

Third, none of the presidential candidates on the GOP ticket fill me with anticipation of strong action to reverse the Obama legacy. Newt Gingrich might be the conservative Newt who worked with Reagan, or he might be the whacko Newt who ran ads with Hillary Clinton on health insurance and sat on a couch with Pelosi, the one who told us all we have to "get past" Reagan. Perry seems to me the most likely to actually attempt to reverse anything, but I can't get a read on the guy because he just seems to be flailing around like a drowning man. Santorum would reverse the social policies, but the fiscal ones I'm not convinced he sees as a problem. And while Huntsman and Paul aren't even remotely close to winning anything, Paul would try but have absolutely no political clout, allies, or clue of what to do, and Huntsman is fine with what's happening - or at least, fine enough not to change things.

And further, I strongly doubt any of these candidates would as president clean house in the various agencies now so totally infected with hard left extremists as to be useless, which is so desperately needed. President Bush didn't clean house, leaving the Clinton folks in. President Obama did clean out people, and packed them with academic leftist allies. None of these guys, I suspect, would do the job except Ron Paul - but his choices would be just as loony, in a different sort of flavor. We'd lose an EPA head who thinks plant food is killing the planet, but would get in their place an EPA head who thinks jets are putting mind control gas in their contrails.

However, what would be different is that none of the candidates running for office would likely veto any changes that congress tried to make. So if congress wisely decided to pare back the EPA, detonate the Public Broadcasting System, delete the Health Insurance Takeover act, or scale back the number of czars a president can have, the bills would probably make it into law.

And further, none of these presidential candidates would be the sort to choose Elena Kagan as a supreme court justice, or pick the radicals for federal judicial positions that President Obama prefers. They wouldn't necessarily pick really great jurists, but I'll take a Justice Kennedy who was inconsistently leftist over Justice Sotomayor who is totally reliable in her leftist rulings.

And none of them would bow to dictators, negotiate with the Taliban behind the scenes, second guess or deny generals what they need, or create such stringent rules of engagement that the troops can't do their job.

Finally, a Republican president would signal business that the war on their earnings and expansion is over. It would end a president who is ruthlessly hostile to the economy and any business smaller than Citibank or Goldman-Sachs. It would end the constant piling on of new regulation, the continual threat of higher taxes, and the endless attacks on them in the press and in new policy nearly every week. And that would mean a tremendous boost for the economy.

Its not that businesses cannot expand or hire right now, its that they see no reason to because they fear the next hammer that falls will destroy them, and the biggest one of all is the business-slaughtering Government Health Insurance Takeover Act.

So in the end, an Obama loss would be a net gain, if not a very big one. It would not save the country from its failings and massive, crushing debt, but it would at least give us a few more years to hope to reverse things. And right now, that's the best we can hope for.
Posted by Christopher R Taylor at 10:11 AM

Well, with Ron Paul, you would "lose an EPA head who thinks plant food is killing the planet" and gain... nothing. Because there would be no EPA. Nixon created that department with an Executive Order and another President could destroy it with the same.

And that is one thing the President can do without Congressional authority: hollow out or destroy many of the existing regulatory agencies that make up the Presidential Cabinet. They are almost all Executive level departments (although they unconstitutionally wield legislative authority).

I know Ron Paul has plenty of other problems that keep people from voting for him, including a near-total lack of electability in the general election... but this is one area where I think he beats all the other candidates, hands down. He truly understands and believes the arguments you and I often make about the federal government ignoring the Constitution, and he would do what he can to correct it.