"I still have a lot of anxiety about overeating, getting enough exercise and being attractive"
I like women in general; they smell nicer than men, look prettier, and have fascinating personal quirks that offset and compliment men well. Whether she's tall or short or has red hair or blond or whatever doesn't particularly matter to me. I even like chubby girls, flat girls, older women, as long as they have a beautiful soul and a kind personality.

What I don't care for, however, is the culture that demands women be skeletal. Most guys prefer women with some curves, as I've written about in the past. Ericka Anderson at The Sweet Life compared a few women: 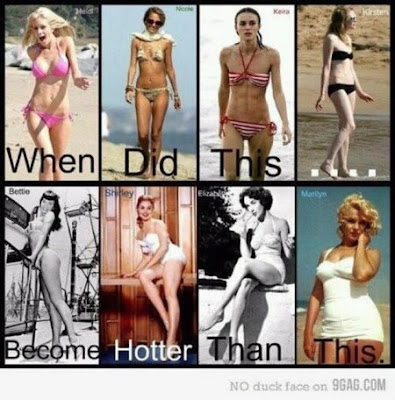 And Right Wing News picked this up and agreed that the fashion and entertainment culture seems to prefer women a lot more emaciated than the general public. I liked Keira Knightley a lot better before she went on the "Body by Heroin" diet program, for instance.

Now, not every woman looks like Betty Page or Marylin Monroe when they put on weight. Many look like Roseanne Barr. And when I talk about curvy, I don't mean huge boobages, although at least some guys think that's the definition of beauty. I just mean "not looking like a pre-teen boy." And I think almost all men agree with me on that.

However, when ever this topic comes up, there's usually someone who brings up this argument: men are programmed genetically to like rounded women because when we were all pre-evolved ape men living in caves, chubby women meant survival for children and yadda yadda.

There are some serious flaws with that argument, as commenter (and sometimes blogger here) Martin Hale pointed out at Right Wing News:

If by "caveman" times you're referring to the period between 60,000 to maybe 15,000 years ago, I'd suggest that most men lived with such small groups that there really wasn't a whole lot of choosing going on. Given that all the archeological evidence points to people of those times living in small bands of less than 15 individuals for most of the time before the development of agriculture and the development of settlements, that would suggest that most men had no more than 7 females around him at any time, and of those 7, only some fraction of them would be 'ripe' for mating. One of them was probably your mother, and a couple more were probably your aunts. You mated with the females who were available, which might have been two or three. I'm sure there was marriage trading of females to counteract inbreeding (though I doubt they understood why they needed 'fresh blood'), but I seriously doubt that any woman was turned down if she wasn't 'curvy' enough. If you encountered females from another band of people, I'm betting you mated with them on the spot - regardless of whether they were curvy or not.

That scenario you're citing is a romanticised fantasy undoubtedly born of a desire to juxtapose the modern idea of choosing a mate from among a pool of possible mates, and of beauty being the determining factor in selection of sex partners. Guys mated with whomever they could to increase the chance that their DNA got passed down to survive them.

If anything, the concept of selecting a mate based on physical characteristics is one which evolved as humans became more settled and civilised and actually had a choice of mates.

The far more reasonable and plausible theory I've heard is that men like women who look different than them, so they tend to be more attracted to women who display greater feminine distinction from male anatomy.

Unless they're gay, then they'd prefer women who look like boys. As in, the fashion and clothing industries, and Hollywood makeup and costuming artists. So we get this divergence between what actual guys want and what the entertainment and fashion industry shoves at us.
Posted by Christopher R Taylor at 7:38 AM

Much of the 'pick up artist/game' culture (this week they are calling themselves the 'seduction community') that is becoming increasingly popular on the internet is predicated on the authenticity of those kinds of claims regarding "caveman behavior" (and cavewoman behavior). They base all this stuff on research from a scientific branch known as 'evolutionary psychology'.

I've read a lot of these claims, and while they are interesting, they always seem pretty dubious to me. They almost always operate under the assumption that human beings are as tied to their base emotional impulses as are dogs or monkeys. They tend to treat anyone who questions this dogma as an anti-science flat earther.

I'm a pretty firm believer that human beings came about as the result of some type of (divinely inspired) evolutionary process, but when I talk to these folks about evolutionary psychology, I think I understand how creationists feel when talking to evolutionists!

After Darwin's book came out, there was a lot of discussion about how that might apply to all aspects of life. Religious evolution, economic evolution, cultural evolution, social evolution on and on. Most of that was utterly discredited nonsense but you still hear it come up among academics.