"We don't have locks and keys here."
Return of the Jedi was the first sign that all may not be right with George Lucas. The teddy bear Ewoks not being systematically annihilated by the storm troopers was the final straw for a lot of fans who like me started wondering why anyone would even put them in the movie to begin with, and how on earth such an incompetent set of idiots managed to conquer anything, anywhere to begin with. They couldn't hit anything, had no tactics, their technology was apparently little more than what a kid with a cardboard box could invent, and their armor was no protection whatsoever. These guys wiped out every single Jedi in the universe save two?

Still, the concept of the tree village, with platforms and buildings high up in massive forests is a concept that has long fascinated people, and its rarely been as well portrayed as in that movie. Michael Garnier lives in the little mountain village of Takilma in southern Oregon. There he's built a series of treehouses and platforms connected by walkways that draws to mind the Ewok village.

Garnier is sort of a treehouse nut; he has showers, toilets, heat, and power run into several of the ones he's built, which make them presumably livable even in the winters of cascade mountains living. The man claims that he has the highest concentration of treehouses in the world. 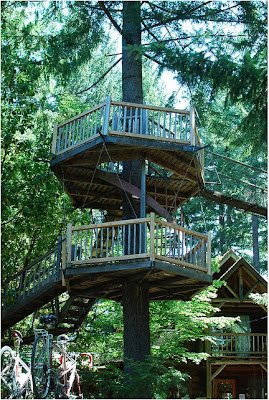 He's a bit of a hippie loon but he's pretty skilled with wood and the place looks quite interesting. He's learned a lot over the years about building treehouses. Part of the problem is that the buildings he made were not up to code and he couldn't get a permit (no concrete foundation, the wood wasn't treated etc). He was only able to get permits by getting national news out to see him test the weight but he'd built it a bit differently. 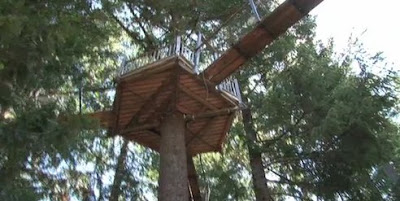 The problem with most treehouses is that they aren't flexible and won't work with the natural form of the plant they're built on to. What he does is make an artificial limb to hold the structure in place which the tree grows around, and hang the structure off these "limbs" to build off of. 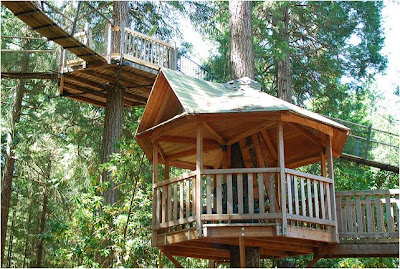 In any case, the structures are interesting and its always fascinating to me how people learn to work with the limitations and difficulties of engineering something new.
Posted by Christopher R Taylor at 9:47 AM