“I know all about counterinsurgency doctrine. It means shake hands in the light and kill at night.” 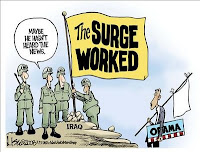 The Surge in Iraq brought about the victory that President Obama refuses to admit to and ended years of turmoil and destruction in the country. There are a lot of misconceptions about the Surge, however. The biggest one is that it was just more warm bodies that did the trick, as if we just didn't have enough people on the ground.

It was true that our soldiers were overworked and undermanned, but that wasn't what changed things. Previous to the surge, the general in command (George Casey) was using Vietnam-style tactics of fire bases in various dangerous areas where men would head out from and come back home before things got too dangerous.

With Patraeus taking over, the approach changed. Instead of using hit and run hiding in safe spots, he called for more troops that would allow him to shift tactics, and President Bush wisely agreed. He put his men into the cities, made them very visible and active, beat the bad guys very visibly and clearly, and established the troops as friends of the locals and tougher than their opponents. This is counterinsurgency 101, and as David French notes recently in National Review Online, clears up myth number 2 about the Surge: that it was all about being nice to the locals.

In the years since my deployment, one of the (many) misconceptions that seems to have captured popular imagination is that we won in Iraq after we essentially adopted a kinder, gentler war-fighting strategy. We actually won after we sent our infantry and our cav scouts into insurgent-infested neighborhoods, had them build tiny outposts, and essentially declared that we now owned that part of town. No more “strike and leave” (what some called “commuting to war”); instead it was “clear, hold, build.” And believe me, “clear and hold” meant very hard fighting.

The soldiers found the bad guys where they were, stomped them where they found them, and held the areas to keep them out. Again, this required more warm bodies, but simply more soldiers with the old tactics wouldn't have worked. As I wrote in my piece on the Surge back in 2007:

The three stages are Concentration (put soldiers in the places most troubled), Visible and Immediate response (have a constant and obvious presence of soldiers, and react immediately to problems, punishing the people involved on the spot if possible), and project a sense of inevitable victory, so that the insurgents lose heart.

And it worked. Why didn't it work in Afghanistan? We had the same general (Patraeus), President Obama sent some of the troop increase requested, so why isn't it working?

Well there are several reasons. Some might say having Pakistan next door helping send troops, money, and weapons into Afghanistan hurts matters more. And that's true; its harder on our troops to have a neighboring country harboring enemies and assisting them. But that was true in Iraq as well, with Iran shipping weapons, men, and death into Iraq. They were beaten anyway. The real reasons are threefold, as I see it.
First, the generals requested many more troops than President Obama sent. They need lots of boots on the ground to pacify and hold areas. Without enough, you can't get where you need to be and hold it safely.

Second, the rules of engagement laid down by the Obama administration and his Pentagon appointees restrict action much like in Vietnam, and the soldiers cannot get into and do what they need to do. General McChrystal had established a hands-off policy to save civilian lives that was so restrictive soldiers were frustrated and unable to do their job properly. Most of those rules were held in place when Patraeus took over, handcuffing him.

And third, Afghanistan's terrain and size makes the work significantly more difficult and slower. Instead of having easily identified regions of trouble, the whole country seems to be boiling with resistance. It will take longer to get the job done in Afghanistan because of this issue.

And all of this became a problem because of the left's betrayal of the nation and our soldiers, as I wrote about last week.

And unlike in Iraq, the right isn't fighting every day to keep our men there and let them do their job. Too many on the right are shrugging and saying "well bring them home" because its taking so long and is so tough. Men are dying, they say, lets just get it over with. And we have a president eager to do just that, rumored to actually be having talks with the Taliban behind the scenes. With the Fast & Furious scandal we've already seen how far the president is willing to go to make a statement of his come true.

So the time we need almost certainly will not be given the troops, handcuffed already by rules of engagement that do not permit them to do their job, and undermanned to begin with. Its almost as if President Obama doesn't really want Afghanistan to succeed. And perhaps in the end, it can't, but we'll never know unless the soldiers there are given what they need to try.
Posted by Christopher R Taylor at 9:02 AM