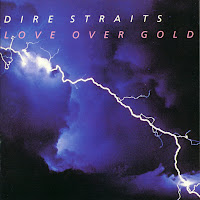 Dire Straits is one of the greatest bands that has ever played popular music. I am not really sure how to classify their style; it is somewhat blues driven, somewhat art rock, and mostly its own unique genre. Their first album exploded onto the music scene in 1978 and went double platinum, establishing the trio as incredible musicians and shattering the view of England's music scene begin only punk or proto new wave. When music was fixated on Disco, Dire Straits focused on a blues rock core led by Mark Knopfler's amazing guitar work.

The follow up album Communique didn't sell quite as well, but still went platinum and I actually like it better than the first. Then they came out with Making Movies, which I've done two songs from in this series, and then there was Love Over Gold. Although it wasn't as great a commercial success as the first three, it is in my opinion their best work. The songs on this disc are relentlessly amazing, from start to finish. Every Dire Straits album is great but this one stands above the rest.

The song "Telegraph Road" is very long, fourteen minutes of beautiful soaring guitar and keyboard work (both by Knopfler, again), telling the tale of how a town came to be. From its origin of someone just building a home in the wilds to the coming of the train following through wars and into the modern era, the town grows and changes. And finally we come to where the town is falling apart, its factories closed, its jobs gone, its hope shattered.

The song reminds me of "Thunder Road" by Bruce Springsteen where the singer is talking about getting out to a better place, promising his love that they'll get away and find a new life. The town has fallen onto the worst of times and all that promise and the work of previous generations has crumbled. There's no word why or how, only the sadness of what once was and could have been lost for so many people. And in 1982, it wasn't hard to see why someone would have that thought in England (and the US), gripped in a deep recession.

Today we're in the same kind of situation, with many cities such as Detroit, Baltimore, Cleveland, Los Angeles, and others in the United States seeing their dreams fall apart. The economy is awful, the future seems bleak, and someone starting a new family has to be looking for a way out, somewhere they can flee to. In a short time, things turned around after the Carter recession, and eventually they will from this one as well.
A long time ago came a man on a track
Walking thirty miles with a sack on his back
And he put down his load where he thought it was the best
Made a home in the wilderness
Built a cabin and a winter store
And he ploughed up the ground by the cold lake shore
The other travelers came walking down the track
And they never went further, no, they never went back
Then came the churches then came the schools
Then came the lawyers then came the rules
Then came the trains and the trucks with their load
And the dirty old track was the telegraph road

I'd sooner forget but I remember those nights
Yeah, life was just a bet on a race between the lights
You had your head on my shoulder you had your hand in my hair
Now you act a little colder like you don't seem to care...
Well just believe in me baby and I'll take you away
From out of this darkness and into the day
From these rivers of headlights these rivers of rain
From the anger that lives on the streets with these names
'cos I've run every red light on memory lane
I've seen desperation explode into flames
And I don't want to see it again...

This is part of the Songs I Like series.
Posted by Christopher R Taylor at 8:36 AM