SONGS I LIKE: Pretty Little Miss In The Garden (Ralph Stanley) 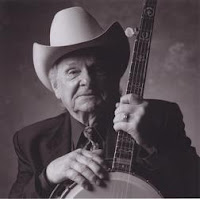 Not long ago I got a double CD called Clinch Mountain Country which is packed with hits by Ralph Stanley. What he did was find a bunch of people who made music he liked and asked them to join him on his old songs. Ralph Stanley has the most lonesome, old timey, mountain bluegrassy voice I've ever heard, and he's a classic bluegrass titan along with Bill Monroe and Flatt & Scruggs.

There are a lot of great, really old time songs on the discs, including some old gospel songs, classic Stanley brothers music, and bluegrass standards. In particular I liked this one that he did with Alison Krauss, who requested to sing it with him. Alison has such a beautiful voice and it matches well with Ralph Stanley's high tenor.

The song is about a girl who is waiting for her man to return from sailing. He's been gone for seven years, but she's still patient for her love. She's so patient, in fact, she'll wait until she dies, no matter who comes courting. She even insists that if he found another, then she'll love that woman because she must be something wonderful to have caught his love. It ends with a surprise twist that brings the romantic tale full circle.

Its a song of faithful constancy, of commitment and trust that is striking in its simple, strong message and the two of them sing it beautifully. Ralph and his brother Carter Stanley wrote a lot of great songs, and this stands high among them.
Pretty little miss out in the garden
Strange young man came riding by
Down at the gate he did address her
Saying pretty little miss won't you marry me

He picked her up in arms so tender
Kisses he gave her one, two, three
This is your little single soldier
Returning home to marry thee

This is part of the Songs I Like series.
Posted by Christopher R Taylor at 8:17 AM

He does a version of one of the most devastating bluegrass songs I've ever heard... The Little Girl and the Dreadful Snake.

It's the kind of song that leaves you thinking it's not really fair to make stuff like that up for the sole purpose of cracking open someone's heart.

Makes me think of Footprints in the Snow:

Somehow its so very sad and yet hopeful at the same time. Nothing but Bluegrass really does this.

I can't figure out if he found her dead in the snow, or if the footprints led him to her, he saved her life, they grew up and grew old together, and then she died and he remembers her every time it snows.