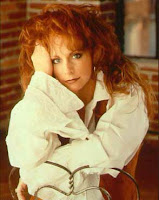 Sometimes music deals with the worst parts of life. In fact, often blues, country, and bluegrass will do just that, focusing on the hardest moments and how you get through them. Johnny Cash wrote songs about suicide and failure, and he did a wonderful version of the Nine Inch Nails song "Hurt" about drug addiction. These kinds of songs can be hard to listen to, but at the same time can be healing and powerful tools to deal with hardship. Listening to the blues when you're feeling down can be quite helpful.

The song "Fancy" by Reba McEntire is about a young girl in a terrible situation being sent out by her mom to try to save the family. In essence, her mom turns her out as a hooker to earn money so they can survive. This is a cruel, awful story that is far too common, but when women are with their backs against the wall sometimes there doesn't seem to be any other options - and some times there aren't.

Fancy starts out a little girl in a low down shack, moves up to being a high priced call girl, and finally ends up living a better life. Her story is sad and while defiant and determined, the hopeless sadness of her life comes through and you can't help but feel for a woman who had no hope but to give up everything and be used by others. Now she's doing well financially but her life still seems dominated by that moment when her mom turned her out.

There's a lot of girls out there in this situation, and while its easy to condemn them, what they need most is compassion and a way to escape - or at least the knowledge how. That's one of the most needed and least implemented charity services in the world, mostly because of where it takes you and who you have to deal with. God help these women and girls, because few other people are.
I remember it all very well lookin' back
It was the summer I turned eighteen
We lived in a one room, rundown shack
On the outskirts of New Orleans
We didn't have money for food or rent
To say the least we were hard pressed
Then Mama spent every last penny we had
To buy me a dancin' dress

Well, that was the last time I saw my Ma
The night I left that rickety shack
The welfare people came and took the baby
Mama died and I ain't been back

I charmed a king, a congressman
And an occasional aristocrat
Then I got me a Georgia mansion
In an elegant New York townhouse flat
And I ain't done bad

I guess she did

This is part of the Songs I Like series.
Posted by Christopher R Taylor at 11:53 AM