"The Jew is using the black as muscle against you, whitey"
-Illinois Nazis 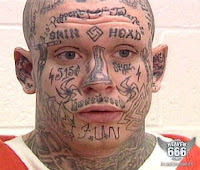 What's interesting about the fascist movements of the early 20th century is that they were academic left leaning in their origin. Both the Nazis in Germany and the Fascists in Italy were socialists, opposing communism, but embracing leftist ideology in economic areas. As I've written about several times in the past, portraying Nazis as right wing extremists is historically ignorant and false, but its one of the most persistent myths of the 20th century.

However, modern fascists and Nazis, in America, at least, do tend to be right wing extremists. They blend idiotic racial purist theories (like, say, the Black Panthers or Black Liberation Theology movements) into small government states rights arguments and end up not just confused, but stupid sounding. I can't stand these guys and I hate their ideology, because like Ron Paul's whacko extremes, they do damage to the ideas of small government constitutionality. Its like having someone support the idea of peace and kindness to strangers... and raping baby seals. All the sudden all that stuff about kindness and peace is a little suspect; its blighted by proximity.

We're told over and over, every time there's a Democrat president, that these groups are "on the rise" and "growing." Breathless news reports tell about how those creepy militias and right wing groups are increasing because those crazy people in flyover country are terrified of a Democrat in power. So its been with this administration, which even put out a warning about domestic terrorism which focused almost exclusively on those crazy white Republicans.

Recently at Taki's Magazine, Gavin McInnes wrote about neo-nazis, skinheads, and right wing extremists in America. Its pretty funny because he writes about what it was like when reporters actually encounter these groups:

When Nancy Pelosi’s daughter was starting out as a reporter for NBC, she told me they had her go undercover and join the KKK. I managed to convince her to show me some of the footage she had secretly recorded, and I almost died of boredom. All she did was sit around, listen to lonely people bitch about their lives, and then go back to her bunk and worry. NBC ended up feeling just as bored and after putting her life in jeopardy for several weeks, they decided to throw the story in the garbage (though I love the idea that the Speaker of the House’s daughter is technically still a KKK member).

Alexandra Pelosi’s experience was not unique. I was recently developing a show for BBC America with Louis Theroux’s old producer. I suggested we try to find some white-power gangs in London. “At first, I love that idea as much as the next guy,” he told me sighing, “but we’ve tried to do this before and the same thing always happens—nothing. Gangs are hard to find and when you finally do get ahold of them, you’re left with some incredibly dull lifestyles. The white gangs drink, the black gangs get high, and they both watch TV all day.”

Newsweek recently had a feature called “My Life as a White Supremacist” that was almost as boring as the KKK store in South Carolina. The FBI informant who’s quoted throughout the piece gave few examples of anything consequential outside of “They would take you out and have you shot.” They didn’t—but they probably “would.” Newsweek ignored the lack of scoop and chose to go off on a tangent about this imaginary “resurgence.”

The truth is, these movements are filled with exactly the kind of knuckle dragging sister-marrying redneck trash the Manhattan cocktail crowd thinks everyone they fly over on the way to Malibu consists of. These really are the low IQ, functional retarded batch of losers of society, the detritus who latch on to these idiotic theories and claims because they want someone else to blame for how much they and their lives suck.

In the middle east, we call these people "palestinians," but in America, they're the lowest of the low class trailer dwelling losers. And they don't accomplish anything. If they're growing I suspect their new numbers are primarily made up of reporters and undercover cops, if anything.
Posted by Christopher R Taylor at 9:17 AM