THE PROBLEM WITH COULTER

"And that was before Romney said last week that Obama’s drunk-driving, illegal alien uncle should be deported!" 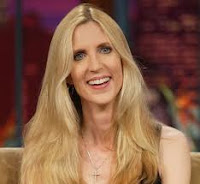 One of the dangers of being a public figure or pundit is that eventually you're going to say something, perhaps a lot of things, that annoy a bulk of your usual audience. I would argue that unless you do say things that upset your usual audience once in a while, you aren't particularly interesting or thought-provoking, all you do is throw red meat out to chew on. That can be profitable and amusing, but you serve no purpose other than rousing the masses if that's all you do.

I've never been a big Ann Coulter fan, something I've noted on here several times in the past. I do find her often humorous, but she's just not someone I read often or defend when she says stupid stuff. Which she does every so often.

Yet lately, it seems like she has few friends among the folks who used to adore her. Ms Coulter quickly latched on to who she thought had the best chance of winning the presidency - Mitt Romney - and has held on tenaciously like she always does. Her columns regularly savage anyone who challenges Romney, and since Romney is the mainstream GOP leadership choice, the Tea Party sector of the right is not exactly pleased with the man. After all he lost to John McCain in 2008, one of the least-liked Republicans in congress.

And there's a problem with Coulter's arguments. I've long complained that Ann Coulter generalizes, accusing a large group of doing what only its small portions do. She tends to use snarky, bitter language and cheap shots to hurt and attack rather than convince and persuade. She usually is well-informed, but has a tendency to leave out parts that hurt her case. And that's something her fans tended to dismiss or ignore.

Ann Coulter is willing to say anything to elect Romney. Her attack on Santorum is just a small taste of what she has said about Newt and Tea Party supporters.

It’s sad to have to admit that so much of what the left-wing said about Coulter is true, it just didn’t seem so bad when it was pointed in the other direction. But as they say, what goes around....

Her most recent column attacks (the latest to threaten Romney) Rick Santorum's record on immigration, by arguing he should have voted for the McCain immigration bill, demonstrating he's weak on immigration. The problem is, as a reader at Legal Insurrection points out, she wrote a column attacking that very bill. She called for congressmen to vote against it.
This is something I worry about, that I'll reverse myself stupidly and its all here in print. I try to be consistent and show integrity, but I'm a sinful human being with a flawed mind and heart, so I'll probably do it eventually. If I do, I hope someone is swift to point it out and call me up short.

But Ann Coulter is doing so not out of a sudden change of heart, but an argument that her candidate is the best choice and everyone else is horrible. This is boilerplate Coulter: if you disagree, you aren't just wrong, you're a pathetic, treacherous, miserable idiot.

She even wrote a column about how Romney is the only choice for the right because he's so great on government health insurance. How can she argue this for a man who unswervingly is proud of and boosts his government health insurance bill he signed into law while in his one term as governor? She doesn't try to appeal to Romney's strength on the issue - he has none. She

doesn't even attempt to argue that Romney claims to reject the federal version on federalist grounds (saying that its okay at the state level but not federal). She just argues that he can win, and we have to have a president who'll sign a bill repealing it. That's her whole argument on the issue.

What's going on with Ms Coulter? Well, I can't read her mind, but I suspect she came to the same conclusion I did, that as awful as McCain was, we'd be better off with him over President Obama. She isn't willing to write an "I was wrong about McCain" column, either out of ego or business strategy, so she's doing the next thing: backing the GOP choice this time.

McCain wasn't elected out of a love for the man by Republicans, he was funded, pushed and slipped into the nomination by the GOP leadership who worked to block other candidates, manipulated the primary system to allow non-Republicans to vote for the guy they despised least, and pushed the next guy in line to the front. McCain lost to Bush in 2000, so he was the next in line. Romney lost to McCain in 2008, so he's next in line. Pushing losers as the best choice seems a questionable strategy at best, but that's the GOP leadership for you.

So now people are seeing what its like to have Ann Coulter pointed at them instead. Like Nelson from the Simpsons laughing at himself in a mirror, they can see that isn't so fun any longer. And that's the basic problem I've long had with Ann Coulter: she's mean and small and snarky rather than truthful, honorable, and thoughtful. That's fun for a laugh once in a while, but its all she offers far too often, which makes her less productive than she could be.
Posted by Christopher R Taylor at 8:33 AM

What's disconcerting is that there has been no 'selling' of the candidates. It's like watching an old-style family business operate:

"Sure we do this 'marketing' thing. We run ads in the local paper. We see the publisher every Thursday at the Chamber luncheon. It'd be rather awkward if we didn't give him our business."

"Why should we search for a new sales rep? John's recommended his nephew. Dick likes him too. That's good enough."

"We want Mitt to run the company. He spent years in the business, started in the mail room. He knows everyone in town. It's his time."

If I do, I hope someone is swift to point it out and call me up short

I do, but in a civilized way.

Well said CT and what you said about her. I think also goes for any of the speakers like her on both the right and the left.

I know for myself I am much more likely to listen to political pundits when they do not seem mean spirited to me and all to often Ann Coulter and I will use Bill Maher, come off as smug and mean spirited and that does not benefit the dialogue that is needed to accomplish things in a Democracy.

I think you do work hard at being consistent and while there are times that I may disagree with you. I never feel that what you are saying does not come from real convictions and consistency in your positions.

Phillip, your argument about Mitt is exactly how I feel Newt has been sold as well. That's a problem with both of them... Mitt is being sold by the Republican Party guys, while Newt is being sold by the Washington D.C. Insider guys. Neither side is trying very hard to sell their product, and both sides are unreliable.