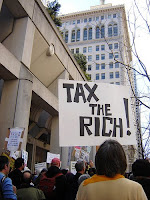 The US national debt is fifteen trillion dollars, or roughly $50,000 debt per man, woman, and child in the country. That's a lot of money, but actually America can produce that much money out of its citizens if absolutely needed; the total assets of every single person in the nation total more than fifteen trillion bucks. You can't actually tax enough to gather that, but there is another way. Bert Prelutsky suggests one:

After conducting a little research, I discovered that there are over 400 billionaires in America. Thirty-one of them are worth more than ten billion dollars, 11 of them worth more than 20 billion. Bill Gates tops the list at $59 billion, followed by Warren Buffet at $39 billion. I’m sure it’s just the cynic in me, but when those two pals get together for lunch, I can’t help wondering which of them pretends to have left his wallet in his other jacket.

In fact, the top 400 richest people in the nation are worth more than 10 trillion dollars. If you tax those people, you'll only get a portion of what they earn each tax period, but they own and are worth significantly more than they earn each year. And the list of names of these vastly wealthy people includes many hard left folks who keep calling for higher taxes on the wealthy:

And yes, that includes George Soros, Bill Gates, and Warren Buffett. So Prelutsky says "The way I figure it, all we need to do is confiscate all their money and we are nearly 70% of the way to eliminating the national deficit." I mean, after all if the 1% are so brutally abusive and controlling, if they are so evil and unfair, well they should be punished, right? Sure, you'd have to take everything they own and sell it off to... well someone, perhaps Saudi oil sheiks, because nobody could afford it in America. That means their cars, and their jewelry and yachts and homes and furniture and clothing and... well you get it.
But, as Bert notes: a lot of President Obama's biggest supporters and leftist allies are in that list. And if you seize all their funds, well who's going to donate a billion dollars to his campaign fund? You'd have turned the 400 richest people in America into homeless people, but that's for the greater good after all. The needs of the many, as they say. Or as Jeremy Bentham said, "It is the greatest good to the greatest number of people which is the measure of right and wrong."

And in that little satire is the answer for why guys like this keep calling for higher taxes on the wealthy: they already have earned their billions. If you tax, say, Bill Gates, well he's earning quite a bit each year, but he's already piled up so much money it won't make any difference to him. He already has his hundred million dollar future home on Lake Washington, George Soros already has his tax sheltered investments in place. Taxing them more wouldn't hurt or matter.

Who it would hurt is people who are trying to make their millions; it would hurt the entrepreneurs and ambitious folks who are working hard to get wealthy now. It would damage the ability of others to get rich and compete with the super rich. See, if your massive company is already in place and you're fabulously wealthy, the last thing you want to see is some new upstart with a clever idea free to develop competition to your money train. Punitive taxation cuts back their ability to do just that.

Sure, that kind of thing stagnates the economy and concentrates more and more wealth in the hands of fewer and fewer people who claim nobility and moral high ground by calling for more taxes on them. After all they're paying a greater share, and they even wanted it, how can you condemn them?

But then seizing the assets of the 400 riches people in America - some of the most wealthy on the planet - to pay off debt means that you take a monstrous chunk of the economic power of America and create... nothing. In other words, what you would have done is delete a gigantic slice of the American economy not in an investment, but in paying a loan off. So the damage to the economy would be devastating.

And once that loan is paid down, it starts piling up again. But your 400 richest people aren't any longer, so you get nothing from them in taxes. And the debt would pile up rapidly, by hundreds of billions a year. And once the debt is gone, congress would go berserk with more spending. After all, the debt is now lower, its not a problem any longer. Happy days are here again, time for more omnibus spending bills and earmarks!

And since your economy is so damaged by that massive theft, perhaps a third less powerful than before, maybe more? Then your ability to pay for these spending projects has dropped by that much as well. So the debt piles up even faster.

This is what nations like Greece are demonstrating with painful effectiveness. You can't just keep handing out money to people and taking it from those who produce, eventually they stop producing either by leaving, going bankrupt, or hiding their assets and sitting behind a fiscal fortress. And the country begins to collapse. Faced with either cutting back on the absurd spending or getting bailouts, the hand always goes out to other countries. And even the token attempts to cut anything are met with riots.

As satire, of course, this works. It points to the violent opposition between the president's rhetoric (and, I believe, his ideology) and his actions. He could call for this kind of thing, but it would hurt him politically and hurt his party deeply, so he makes meaningless gestures calling for a small increase in taxation on the wealthy. That works, it appeals to the less-than-informed and intellectually incurious. It feeds jealousy and envy, and it offers a mythical solution to people that doesn't involve them doing anything themselves.

If you have a child's understanding of economics, taking from someone else to give to someone who has less seems only logical; and in the short term, it would work, for a while. And that's what President Obama is counting on and playing into.

Because this isn't about income inequality or unfairness, its about turning one group of Americans against another group in order to gain political power. With sufficient political power, well maybe then its time for the redistribution to begin, but until then, it won't really take place in the degree required to pay for their schemes.
Posted by Christopher R Taylor at 8:41 AM