"We have always been at war with Eurasia." 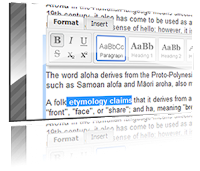 With the advent of e-readers, books are becoming more cheap and more accessible to more people, which is always a good thing. It opens up a huge market to writers like me who can get books published without needing to go through the usual old system and keep a greater portion of their profits.

At the same time, there are some problems with this trend, particularly in textbooks. Via American Digest, there is a story in the Wall Street Journal about e-books by Nicholas Carr. He starts out this way:

I recently got a glimpse into the future of books. A few months ago, I dug out a handful of old essays I'd written about innovation, combined them into a single document, and uploaded the file to Amazon's Kindle Direct Publishing service. Two days later, my little e-book was on sale at Amazon's site. The whole process couldn't have been simpler.

Then I got the urge to tweak a couple of sentences in one of the essays. I made the edits on my computer and sent the revised file back to Amazon. The company quickly swapped out the old version for the new one. I felt a little guilty about changing a book after it had been published, knowing that different readers would see different versions of what appeared to be the same edition. But I also knew that the readers would be oblivious to the alterations.

I've done this, and am preparing to do it one more time with my print book (I don't like the font size and there's an extra blank page I didn't mean to put in it). If you're writing fiction, that's not so big a deal, but it does bring up some questions about purity of editions and personal editing. If you know any artist or writer you know they're never completely satisfied with anything they've completed.

Every artist has to learn the concept of "good enough;" that is, you have to realize that you'll never get it perfect, and you have to settle on a point where the product is good enough for sale. And when you sell a piece, its too late to fix it. Nobody will let you sneak into the museum or their art gallery and chip off a little more marble from that statue or add a few brush strokes to the painting. Its done.

Yet with e-books, the product is never really done. Its never really out of your hands. You can always go in and edit it again. And the temptation is very strong. Every time I read any of my old stuff, I see places I want to change, because as time goes on I get a little better as a writer and think of better ways of stating things. And I catch errors or wording that isn't as clear as I'd hoped.

In the past it took an entirely new print edition to change things like this. You would have to register a new ISBN, come out with an entirely new edition, and usually announce it. The book would say "second edition" and would typically note what was changed in the text or some publisher announcement.

With fiction this isn't as much of an issue. There's no collector out there looking for the first edition Kindle book. Its just not going to be any sort of trend, so changing text without editions isn't causing anyone any problems.

But what about textbooks? Carr goes on:

But as is often the case with digitization, the boon carries a bane. The ability to alter the contents of a book will be easy to abuse. School boards may come to exert even greater influence over what students read. They'll be able to edit textbooks that don't fit with local biases. Authoritarian governments will be able to tweak books to suit their political interests. And the edits can ripple backward. Because e-readers connect to the Internet, the works they contain can be revised remotely, just as software programs are updated today. Movable text makes a lousy preservative.

Its expensive, time consuming, and labor intensive to change printed books. You have to take the old ones away, come up with a whole new printing. In 1984, the protagonist worked at the Ministry of Truth (MiniTru) doing just that: editing old news and books to fit the latest government viewpoint.

But with e-books, its a matter of editing a file, then sending it. Some ebook programs even update and send you new material when you connect. Infamously, some used to get rid of some books you had. And Carr is right here: it would be too easy, too seductively easy, to edit things on the fly to fix them or make them better fit an ideological agenda.

Consider Wikipedia, which can change definitions and entries several times a minute all day long. Some topics are so contentious they are closed to public editing, which violates the entire principle of Wikipedia.

News organizations are already infamous for changing their news stories and reports online when people point out a problem or idiotic bias. Sure, the internet never forgets, but they still slip that new edition in and don't even mention the change. Blogs presently are pretty good at keeping old stuff up and noting at least significant changes, but other folks aren't so careful to retain accuracy and transparency.

So the trend toward electronic books may have its advantages, but this is a serious disadvantage to be aware of and keep an eye out for. In the old days, people burned books. Now they'll just edit the n-word out of Tom Sawyer.
Posted by Christopher R Taylor at 11:52 AM