One of the more popular shows on television right now is a show called Sons of Guns. I've written about the program before, following a Louisiana gunsmithing shop. Its been followed up by American Guns which follows a Colorado gunsmithing shop called Gunsmoke. The Gunsmoke shop is more successful and much more wealthy, but the same pattern of hard working craftsmen, a love of firearms, America, and history, and a respect for the military holds true. Both are on the Discovery channel, which is doing very well by them.

Both shows have strong male owners who are family men. Both have a family feel to them. Both show strong moral fortitude and traditional values. Both are unswervingly gun-friendly and unapologetic. Given that gun sales and ownership have exploded in recent years (gun sales set a record this last Christmas), its not surprising this formula works well and has been successful.

Gunsmoke is particularly interesting because the entire Wyatt family and staff for the shop wear a gun at their hip at all times. I think this is fun because it probably causes the prudish, bitter leftist to blow their stack when they see it, and it feels kind of old west (as does the name Wyatt and the Colorado location).

There's something else about both shows that is oddly paired as well. There is a daughter on each show, and they feature pretty significantly in the program. Stephanie is the 25 year old daughter on Sons of Guns, and she's the center of a little romantic thread running through that program. Paige is the daughter on American Guns and she's a bit younger than Stephanie at age 16 and there's no mention of romance, although I'd be surprised if there wasn't.

Stephanie runs the office for Red Jacket Firearms and handles the website and paperwork. She's a bit overworked as the show has brought huge popularity but seems smart and capable. Paige helps sell out front in the Gunsmoke shop and goes on promotional deals, probably because she's a little blonde cutie. She's a lot more shy and less mature than Stephanie (as makes sense) but the show always includes both girls prominently.

And they annoy me. 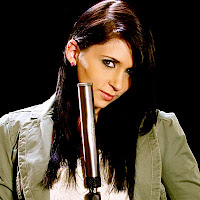 Stephanie is tattooed up and goth, all dark eye shadow and lipstick, and she has that vocal mannerism that far too many girls now affect. It doesn't come naturally, and I don't care for the sound of it. I guess its supposed to sound sexy but I can't stand it.

What she does is called "vocal fry," its a method where you pitch your voice to the point where it starts to rattle a little bit, making it sound rough. Popular singers are using this more lately and it can be a useful effect. Some women naturally have this as part of their normal speaking voice, but most who show this do it on purpose. And Stephanie has a really obnoxious mannerism on top of it that she alternates between a squeaky high end and a breathy sort of "uhn" at the end of every sentence. And none of that is natual, its learned and a pattern you pick up out of habit rather than comfort.

Paige speaks normally enough but she's another problem. She dresses in half shirts and carries her little dog everywhere. She has what appear to be surgically enhanced breasts - they could be natural, but I'm suspicious for a couple of reasons. First, her mom is kind of a Park Avenue girl, with a thousand dollar haircut, jewelry all over and high end clothes. She dotes on her daughter, taking special mom-daughter moments and gently conspiring against dad to get what Paige wants.

In one episode, Paige's jeep got scraped by some parking accident (not her fault) and she wanted money from her parents to get it fixed. I'm guessing that they actually pay her for her work at Gunsmoke, but she might just get an allowance, there's no information here. But she begs them for the money, and her dad says "not gonna happen" then decides if she can demonstrate she knows how to break down, clean, and rebuild a 1911A1 .45 pistol (a fairly complex build) he'll pay for it.

So she and her mom work hard at it, and she does a good job, so they take her out and show her... her Jeep which now has been totally rebuilt bumper to bumper with a new paint job, seat covers, KC lights, special wheels, stereo, on and on. Its a good $10,000 worth of work that's been put into the thing. And that not only wasn't the deal, it doesn't teach her anything except "daddy will buy me anything."

I get the impression that little Paige, while not acting particularly spoiled, has gotten pretty much everything she wants her whole life. The only time so far she's been denied anything is when she wanted a tattoo, and dad put his foot down. So she went out shopping with mom and came home with... a temporary tattoo. Dad said, roughly, "you want to ruin your skin and attract guys you won't want to come home with, do it when you're 18, but not yet."

She just makes me think of a little princess who thinks Paris Hilton is so glamorous and wants to be like that, without realizing what a worthless piece of disrespected trash Paris is. And the little dog carried around really rubs me the wrong way. She is a neat contrast with all the men in the operation, but I just wish she was not like that.

And the reason this bothers me is that its such a contrast with the guys on these shows. There's no son on Sons of Guns but there are several young guys who are basically sons to the owner. They are hard working, dedicated, and skilled guys who show up to work and bust their backs to get a job done, whatever the hours are. Some of them look a bit goofy like the one guy's fauxhawk, the dumbest haircut ever, but they are good guys. They seem like really good guys, if young.

On American Guns the son is Kurt, and while he's late for work sometimes (more often than he ought to be), he shows real dedication and hard work, and is definitely gifted in his inscribing and design work.

Which makes me wonder if I'm being more forgiving to the guys' faults or if the girls stand out because they aren't a part of the traditional American values sort of feel the men are on the shows. Like the men are part of a long, powerful history of American masculinity but the women are a postmodern aberration thrown into the mix to remind me of the world around and how often its more like them than like the men.
Posted by Christopher R Taylor at 9:04 AM

I'd argue part of being a strong man is being an effective father, so creating spoiled rotten, gothy, entitled, postmodern she-horrors is a major strike against their man-credentials, all other things aside.

I am always hesitant to criticize parents for how their kids turn out, because I've seen some wonderful parents turn out a pretty horrible kid but...

there is something to that.

I would argue that the television production bought her the jeep because it made for good tv.

The girls are in the show because guns and sex sells...

Would not want either one because of the control freak fathers that come along with getting the girl. You'd get a choice between a psychopathic hot tempered ex Marine who would knife you to death before admitting he was wrong or a dishonest slick ripoff artist who would sell snake oil at an exhorbitant price and give you half what your guns are worth.