"The time for delay is over. The time for denial is over. We all believe what the scientists have been telling us for years now, that this is a matter of urgency and national security and it has to be dealt with in a serious way. That's what I intend my administration to do."
-President Obama 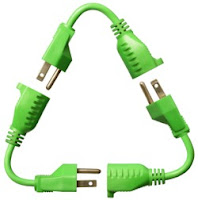 President Obama made another speech yesterday, and it was full of his usual material. Unlike his campaign speeches he actually has to have content in these, so they are less sophistry and more content, but even the content is framed in terms of the future and prediction than hard action and results.

There's a reason for that, of course. His results have been pretty miserable. He can't run or brag on what he's accomplished or done, because its been almost uniformly awful. His okay of taking out Osama Bin Laden is about the only real bragging point and its not a very big one: it was the obvious choice. When your best accomplishment is to be better than President Clinton on taking out an enemy of the United States, you don't have much to go on. So he has to go with airy future promises and predictions, with theories and hopes.

Most of those seem to be framed around the idea of a "green" energy economy, such as these lines:

"Tonight, I want to speak about how we move forward, and lay out a blueprint for an economy that's built to last - an economy built on American manufacturing, American energy, skills for American workers, and a renewal of American values."

"We can also spur energy innovation with new incentives. The differences in this chamber may be too deep right now to pass a comprehensive plan to fight climate change. But there's no reason why Congress shouldn't at least set a clean energy standard that creates a market for innovation."

"Our experience with shale gas, our experience with natural gas, shows us that the payoffs on these public investments don't always come right away. Some technologies don't pan out; some companies fail. But I will not walk away from the promise of clean energy."

And so on. Much of the "stimulus" package was focused on "green" energy, with money going to solar and other businesses struggling to survive, and much more going to research and refitting buildings for more "renewable" energy. As a memo from Larry Summers at the time states:

The stimulus package is a key tool for advancing clean energy goals and fulfilling a number of campaign commitments.

In his State of the Union speech, President Obama insisted there was no reason not to press ahead with "clean energy" tax credits and other initiatives that he said would save businesses money, promote innovation and create jobs. Why this unrelenting focus on green energy? I am convinced that President Obama believes two things, both of which are mistaken and distant from the real world.
First, he believes that "green" or "renewable" energy is the future, and he can make it so. He thinks that the only thing holding back these alternate energy sources is a lack of government funding and push. He thinks that this kind of energy is a massive future market which will build a new, cleaner economy, that America will become the "green" energy OPEC and drive its economy on providing renewable, alternate energy and lead the world.

He's not completely wrong here - if such energy were viable and possible, that would be one way to build the economy. The problem is, it just is not, and all the programs and stimulus and subsidies and loans in the world will not alter basic physics and reality. The only "alternate" energy system that is truly reliable and powerful enough to work is nuclear, and that's one that the left does not want to push.

So his dream isn't completely fantasy, its just based on a flawed understanding of how the world works. Just wanting something to be true hard enough will not alter reality. Solar and wind and geothermal and tidal power and so on cannot and for the foreseeable future will not replace fossil fuels. It probably never will.

The second flaw is that President Obama believes that the government can do and fix anything, if only given enough power and directed by the right thinking sort of people. Several times in speeches he has alluded to the Manhattan Project (this is a popular myth among the left in general) - that if we just put our minds together and funded it enough, we could come up with alternate energy that would replace fossil fuels, clean up the environment, make us all rich, and it would be all rainbows and skittles.

This is why the president ordered the Navy to buy biofuel at $15 a gallon and required federal fleet autos to use a certain percentage of cellulosic biofuel or face fines. The idea was that this would prompt the market to start producing the fuel, since there was now a demand, in the federal government. The fact that cellulosic biofuel doesn't exist outside a few laboratories was irrelevant: now that the government is paying for it, naturally businesses would spring up to produce the stuff.

Every tax dollar taken out to fund something (especially to send overseas to other nations in aid and loans that are never repaid) is a dollar not being used to invest with and build the economy in the United States. To a certain, limited, constitutional level this is acceptable and proper: we need government for certain basic services and actions. That's a price worth paying and the US economy is robust enough to absorb that cost.

But with every increment of government beyond the limits of the US Constitution, the government takes that much more out of the economy which it should not, and does ever greater damage. The most obvious and painfully unmistakable example of this is the present time when businesses simply are not inclined to invest, expand, and hire because of the damage the federal government is doing to the economy and the Nuclear Warhead of Damocles hanging over their heads by a fraying thread in the form of the Government Health Insurance Takeover Act.

President Obama is right that some technologies take time and money to develop, but those technologies were based on reasonable, scientifically feasible concepts. The Manhattan Project didn't work because government threw money and great minds at it, it worked because it could work, because it was a real possibility, not simply wishful thinking and the hopes that somehow if we try hard enough we can force solar and wind to produce more energy than they are scientifically able to.

So when President Obama fixates on "green" energy, he's following through on an academic leftist theory of how the world works, driven by a dream of green energy-driven economy the federal government created. He's got an idea that was shaped by decades of leftist isolation and like-thinking interaction and clings to it like a life preserver. That's why he keeps throwing money at these start ups, keeps returning to the idea, and keeps calling for more money put into a "green enconomy" even though its been demonstrated over and over worldwide to be a complete failure.

Its sort of why leftists cling to Communism as a neat idea; they figure there's nothing innately flawed in Communism, only in how its been implemented, and in the people who tried. And ultimately, it has a sort of twisted consistency. If you think truth is relative and each person has their own truth, then the truth that "green energy" works and can build our future is just as valid as the scientific fact that it cannot.
Posted by Christopher R Taylor at 9:21 AM