"I, Hal Jordan, do solemnly swear to pledge allegiance... to a lantern, that I got from a dying purple alien in a swamp."
Well I watched two movies recently with my brother, and we agreed on both of them. Green Lantern was lousy, I don't recommend it to anyone. Cowboys and Aliens was pretty fun and its worth a Netflix view.

What's interesting to me is that I had low expectations for both films. I'd heard both weren't that great, and wasn't really looking forward to watching them. In one case I was surprised and the other it just was confirmed.

Which is interesting, because I'm sure that sometimes movies are better for being downplayed. If I'd heard that Cowboys and Aliens was four-star great entertainment and favorably compared to Raiders of the Lost Ark I would have probably not enjoyed it nearly as much. Going into it with the bitterness of people upset at how it didn't live up to their expectations, I found it enjoyable. 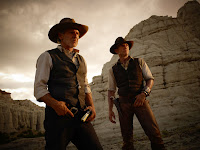 And given the people involved, it could have been spectacular. The acting included Harrison Ford, Sam Rockwell, Daniel Craig, and Keith Carradine. The director was Jon Favrau and one of the producers was Ritchie Cunningham. So it should be pretty great stuff, right? Except it had like 18 writers and it was pretty uneven.

Overall the film was entertaining, and both Ford and Craig were great at their roles, very watchable and engaging. Olivia Wilde did a good job as a strange girl who weaves through the story, and the tale was a fun fable with lots of interesting action. And thankfully, instead of the original graphic novel's theme of "evil European explorers shown their place by aliens exploiting them" it was just a straight adventure romp.

There were, however, some parts that had me going "what the hell?" when people acted completely irrationally (like Harrison Ford's tough rancher thinking some drunk cowpoke blew up a herd of cows and like 40 acres of Texas landscape somehow). And the big the aliens alternated between nigh invulnerability and completely soft and squishy depending on what the plot and scene required. But it was visually fascinating and it worked, overall. I'd give it 2 1/2 stars.

Green Lantern, on the other hand didn't really have anything going for it. The bad guys sucked, the main character was an unlikable lout, the girls weren't that great looking and acted completely randomly based on what the plot required. The first ten minutes or so of the movie was totally CGI, I mean not a single frame that had anything real whatsoever in it. And it was obviously CGI, like the Hulk Dogs in the Ang Lee movie.

I'm not a big Ryan Reynolds fan, and he smarmed it up above and beyond the call in this movie. It was just not very inventive, but long and cliche riddled. Large portions of the film made no sense, I didn't care about any of the characters, and as I've never been a fan of the Green Lantern Corps part of the storyline anyway, a lot of the movie was just not engaging in any way.

Plus, they mangled the character of Hal Jordan. Hal was always a straight arrow, strong willed character with terrific moral character and personality, but not a joking sophomore. In this movie he was a frat boy doofus who made jokes about everything and was a waste of space.

So the low expectations of Green Lantern I had were actually... higher than the movie deserved. I figured it would be entertaining and interesting to look at, but it was just lousy.
Posted by Christopher R Taylor at 12:11 PM