“We are not going back in until all our demands are met.”
-Yusuf al-Qaradawi, spiritual leader of the Islamic Brotherhood
This is the front page of my local newspaper, the Oregon Statesman-Journal on February 12, 2011. 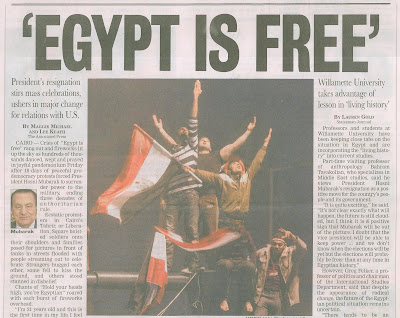 Wow, Egypt free? That's amazing! Its been a year now since the protests started up and pressure was put on Hosni Mubarak to step down from his effective dictatorship over Egypt. When the protests started, the legacy media and the left around the world went nuts in gleeful celebration. Why, it was a genuine revolution started by the college kids in Egypt, and best of all, spread by the new media! They used twitter, isn't that awesome?

The left has always been starry-eyed about revolution and protest, in fact the only mass protest I've ever seen them react negatively to is the Tea Party. That was the wrong sort of revolution, darling, I mean please, they hand lettered their signs. And those revolutionary war costumes, how awful.

People like me saw the revolt in Egypt and sounded a cautionary warning. That's great but what's going to replace Mubarak? Who else is in those rallies besides a tiny minority of college students? Where's the leadership?

We were at best ignored, and often attacked as being anti-democracy, hypocritical, contradictory. Don't you want Egypt free, you despicable neocon? I thought that was what the whole illegal war the Chimperor Bushitler was fighting about, Democracy in the region!1!!

When people pointed out the strong Islamic tone these rallies were starting to take on, we were told outrageously goofy lies. The Obama administration assured us that the Islamic Brotherhood was "largely secular," we were assured that they were a small minority, Islam wasn't going to take over, it was all about Democracy.

The news, step by step, told a different tale.

Repeatedly, visitors and reporters are assaulted, even sexually attacked by dozens of men. It happened over and over again, but the coverage was downplayed. That didn't fit the glorious revolution narrative. People suspected of being Jews are brutally beaten. Muslim-controlled military forces begin to beat and break up the protests. Coptic Christians are attacked repeatedly, with the Egyptian Military responsible for many of the attacks.
Protesters, particularly women, were beaten and dragged through the streets by the Egyptian military. They were daring to appear in public without Islamic dress, and speaking their minds instead of having the men tell them what to think.

Calls for killing the Jews, destroying Israel, and clearing all Jews out of Egypt began to ring in the protests, drowning out calls for democracy.

The left-leaning academic youths who were the centerpiece of western reporting were revealed to have been a small part, not leaders, and lost all input in the revolt:

Egypt's top reformist leader has said the liberal youth behind the country's uprising have been "decimated" in parliamentary elections dominated by Islamists and expressed concern about the rise of hard-line religious elements advocating extremist ideas such as banning women from driving.

Elections were held, and the Muslim Brotherhood announced that if they were given power, they would hold an election to see if the peace treaty brokered between Israel and Egypt in the 70s would be maintained or abandoned.

The military, meanwhile, appointed a politician who served under Hosni Mubarak to be the interim prime minister, a man named Kamal el-Ganzouri. When protesters tried to stop him from entering the capitol, some were killed.

Crowds of Egyptian soccer fans chanted "one nation for a new holocaust" over and over.

Echoing the horrific loss of the Library of Alexandria, protesters burned a library in Cairo in a clash that left ten dead. Islamic leaders talk of destroying the Sphinx and other ancient treasures as idols, recalling the Taliban in Afghanistan destroying Buddha statues.

Senator and former Democrat presidential candidate John "reporting for duty" Kerry (D-Mass) was sent to Egypt to be a representative of the US government to the new Islamic government. The Obama administration noted that it would be "satisfied" with the Muslim Brotherhood controlling the nation.

Meanwhile, the Muslim Brotherhood welcomed previously banned radical Muslim clerics and even the leader of terrorist group Hamas to Egypt.

And the Muslim Brotherhood was swept to power in Egypts elections, taking control of the parliament and Egyptian government. Coptic Christians are fleeing the nation, knowing full well what it means to have radical Muslim government.

You know how you can tell the difference between a really brutal dictator and just a guy abusing power? Look at Syria for the real dictator. Look at Egypt for just abuse of power. Hosni Mubarak wasn't a great guy, but he wasn't the monster Bashar Assad is, and that's why these revolts were able to succeed. Iran had revolts of young people using Twitter and Facebook, too. They were horribly beaten, jailed, raped, and killed while Obama sat by trying to avoid looking like America was behind it.

Arab Spring isn't as hopeful and charming as it was sold by the legacy media. In fact, its pretty awful. Instead of the spread of democracy and liberty we all hoped for and the left constantly predicted and tried to sell it as, we're seeing Iran under Jimmy Carter over and over again. Libya's post-Khadaffi regime is even worse than when he was in power. Tunisia cheered the arrival of a radical Hamas cleric with chants of "kill the Jews!"

In short, everything folks like me warned about and cautioned people not to be too optimistic about these events... has sadly taken place. President Bush set up the seeds of democracy, but after the left's continuous, treacherous betrayal of the nation and the war on terror followed by a president who reversed all the efforts to bring liberty to the region and praise Islam... well people in the region are paying the price.

Egypt isn't free. Its just under a different, more brutal sort of tyranny now.
Posted by Christopher R Taylor at 8:28 AM