"I wonder, though, where the pendulum swings next." 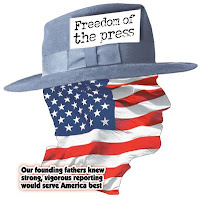 Freedom of the press is one of the most dearly protected and honored rights guaranteed in the US Constitution. If you are an organized, recognized news media business, you are able to do and say things that others cannot.

For example, this is from one of my constitution essays:

In 1971, the Pentagon Papers were published by the New York Times (along with a CBS special by Dan Rather) using leaked classified documents to tell how President Johnson had expanded the war to include bombing along the Ho Chi Minh trail in Laos. The government was angered because classified documents had been released and printed for the world, and because this harmed their efforts to fight the war. The Supreme Court decided in New York Times v. United States that the injunction to stop printing against the Washington Post and New York Times were unconstitutional violations of prior restraint.

The decision was inconclusive, it didn't say whether printing classified documents was acceptable or not, just that the injunctions were improperly obtained. To this day it is considered by some unclear whether a paper may freely print what is illegal for ordinary people to even read, let alone show to the world.

The New York Times has gleefully begun printing various classified documents once more, attempting to repeat the damage they did to the Vietnam War and President Nixon (even though the Pentagon Papers were about decisions from 1945-1967, before he was elected). This kind of activity clearly and obviously violates the laws regarding classified information, but the sacred concept of freedom of the press is so ingrained in the American psyche that even questioning it is considered a violation of the first amendment by some, and the government is extremely hesitant to take action.

News organizations are protected by "shield" laws which allow them to protect sources and refuse to tell where they got information. Typically, most courts and various US governments are reluctant to pressure reporters over material they print unless it is blatantly malicious and deliberately false. It is notoriously difficult to sue any news business for libel, and recognized journalists are able to have a source treated as a reliable and accurate resource, protecting them from lawsuits despite not having to reveal who said or wrote what.

However, competing or alternate news or information forums, such as blogs, are inconsistently protected. Recently, a Federal Judge in Oregon ruled that bloggers are not actually journalists, stating that since this blogger was not "affiliated with any newspaper, magazine, periodical, book, pamphlet, news service, wire service, news or feature syndicate, broadcast station or network or cable television system," then she was not protected by any shield laws.

However, Eugene Volokh recently wrote on his blog about how freedom of the press doesn't mean special protection to such news media. Volokh writes:

I don’t think that’s right, for reasons I talk about in Part I.E of my Penn article on the subject

In essence he argues, and very convincingly, that "press" does not mean the institution of the press as a business, but rather the act of the press in distributing information and ideas through more permanent media. The press understandably insists that they’re a special institution which is protected by the constitution, which has always struck me as at best distasteful. And if Professor Volokh is right, they absolutely are not a specially protected business.

Indeed, the wording of the first amendment seems to strongly support this position as well:

Congress shall make no law respecting an establishment of religion, or prohibiting the free exercise thereof; or abridging the freedom of speech, or of the press; or the right of the people peaceably to assemble, and to petition the Government for a redress of grievances.

The grammar here seems to imply that the press is considered part of freedom of speech, not a special extra protected right, because the different rights bundled here are separated by semi colons. That's not conclusive because you can't make legal decisions based on merely grammar, but it is significant.

And I believe Professor Volokh is right. This shift in perception would have pretty broad significance, not the least of which Volokh brings up: the Citizens United Supreme Court decision. The dissenting argument in that case called for a special class of press protection called "the presses." This would make officially recognized news organizations a special legal class protected in a manner that ordinary citizens are not by official constitutional law rather than traditional legal practice.

Volokh points out that the founders and legal scholars at the time of the writing of the constitution did not treat official news companies as a special "press" class, but rather anyone who used press-related processes to distribute information and ideas, such as pamphlets. That means the Virginia Colony News was press, but so was Thomas Paine's Common Sense and today, blogs and email newsletters.

The Oregon judge's insistence that press means a government-recognized business fits the minority ruling in Citizens United, but it does not fit the founding fathers' concept of the press. And because of that, the clear path for courts to take is a broader recognition of freedom of the press.

Now this presents a dilemma: shall the courts then extend the special protections usually given news businesses to a broader group of people (bloggers, pamphleteers, church bulletin writers, etc), or do they draw back the protections given the news press at present to make them more like other bodies?

Given recent efforts such as SOPA and other copyright bills by recent congresses, I'm inclined to think the present legal minds would head in the latter direction, restricting protections rather than extending them. Bloggers are a gadfly to politicians and judges, bringing to light things they'd rather be buried and poking areas that are sore to these groups. The establishment does not care for this kind of thing. And further, the Citizens United decision enraged the left by allowing corporations to be treated as press, and thus protecting their ability to act during elections.

Information is power, which is why the press is called the 4th estate: a further body than legislative, executive, and judicial to inform and sway the public. When properly exercised, a free press is a powerful tool of liberty and against corruption, tyranny, and abuse by those in power. But over the decades, recently the established news media has become increasingly interested not in generally educating and informing but specifically protecting one political party and promoting its interests.

Because of this that party has a very strong interest in protecting that special position of the press and not extending it to upstart bloggers and new media outlets who won't play by the same one-party rules.

So don't expect this to get much traction on the left, despite its massive free speech and liberty implications. They still are having fits over Citizens United.
Posted by Christopher R Taylor at 8:57 AM

Perhaps bloggers could unite under an umbrella corporation which cannot control the content of the individual blogs, but provides the cover of a protected group.

Isn't using the system against itself what subversives do? What could be more subversive than exposing the entrenched elites?

Wouldn't there be a possibility that left and right bloggers could agree on this?

Without actually reading the court documents and viewing the evidence, it's hard to make a determination on why the judge made his ruling.

Also, note that the ruling was made in relation to Oregon's media shield law. Laws may and will vary in other states.

That said, she didn't do herself any favors in naming the blog "obsidianfinancesucks". Tom Paine called his pamphlet "Common Sense"; he didn't call it "Death to the Murdering British Monarchy".

She also made it worse for herself by stating that "her posts blended facts, commentary and opinion". Yes, wire services and news outlets are guilty of that. But they don't baldly state it.

Hopefully she'll win on appeal. If not maybe she'll make some money off it. She's one heck of a self-promoter.