"Brother can you spare a few texting minutes?"
Quite a while now I've wondered what the unemployment rate was like in the great depression if it was measured the way we measure the rate today. They keep changing the method which is used to determine unemployment and inflation so its very difficult to make proper comparisons between eras.

Thankfully I found a place called Economic Populist that did the work for me. They looked at the levels of unemployment during the Great Depression and broke them down using U-3 and U-6 calculations (the typical way the government reports it and the level that includes people who gave up or never found a job). Presently, the U-6 level of unemployment is almost 18%, which is pretty awful. However, here's what they found: 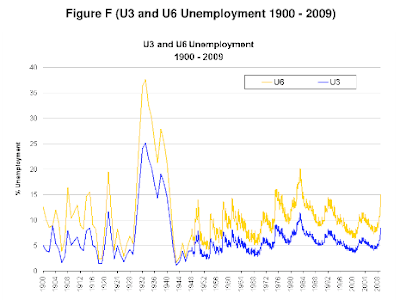 Now, the present unemployment rate is around what it was like in 1930, which is really awful and definitely part of the Great Depression. However, as you can see on the chart, things got much worse, topping off to almost 38% which is ghastly. When almost 40% of your population cannot find work, that's a severe catastrophe. And, of course, FDR's idiot policies following the theories of John Maynard Keynes contributed significantly to this.

So ultimately, we are at the level of depression era unemployment, but not as bad as its worst levels. And the Carter years saw easily the levels of unemployment shown here in states like Oregon where it hit nearly 20% in the official reports and far above that when you count everyone actually unemployed.

During the great depression, we actually saw deflation where the prices of everything dropped because nobody had any money. The combination of inflation and unemployment seen during the Carter years (and to a lesser extent today) was actually thought impossible - how could prices go up while people had less and less money? So that kind of comparison isn't really useful, but we are seeing inflation now, although to a lesser degree than the early 80s.

As I've said before, its good that the press isn't hammering the economy so badly right now, because continually talking doom and gloom significantly contributes to a worse economy. But businesses and economists aren't fooled. They see that while technically, we're in what most call a recovery period, its the worst, flattest recovery in the history of the nation at best, and possibly not a recovery at all.

And deep down, I suspect if we saw the real numbers, we wouldn't call it a recovery at all. And all of that is because bad economic numbers hurt the president - fair or not - and they want to help this man win reelection. So while ordinarily bad news and misery leads for the legacy media, who salivate at reporting terrible and sad things, they're showing extraordinary restraint.
Posted by Christopher R Taylor at 10:23 AM