AMONG THE NATION'S WORST AIR QUALITY 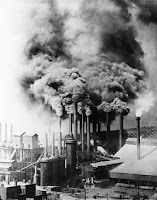 That's a phrase which sounds ominous, but has no objective meaning. Its useless to say something 'ranks among' a group. Everyone in the group ranks among that group. But any time there's a report about air quality in a city, that phrase pops up. At Powerline, Stephen Hayward examined a recent article in the Wall Street Journal which used this phrase.

It has every trope of superficial environmental news reporting and is simply a lazy and tarted-up version of an activist group’s press release—in this case, a local enviro group called the “Breathe Project,” which upon reading between the lines of the story is simply a cat’s paw for the usual suspects such as the Sierra Club. It is another vindication of an observation the Washington Post’s longtime media critic Howard Kurtz once acknowledged:

Some reporters say privately that it is difficult to write stories that debunk the conventional wisdom of environmental activists, whom the press treats more deferentially than industry spokesmen and other lobbyists.

And yes, the story uses the "among the worst" line: "More than half of the residents here aren’t aware that Pittsburgh’s air ranks among the worst in the nation, according to a survey commissioned by the Heinz Endowments." And, of course, it ranks among the nation's best as well. Hayward did a Nexis search for the phrase “smog” and “some of the worst” a few years ago, and discovered the phrase in similar stories about dozens of American cities, because as I've pointed out, its true about all of them, and sounds usefully scary.

In reality, Pittsburgh's residents don't notice any particular problems with the air, and the city actually meets the Clean Air Act standards. What's interesting is that according to Seymour Garte, professor of public health at the University of Pittsburgh, the air pollution levels around the planet are actually decreasing worldwide. This shouldn't come as a surprise.

Pollution levels tend to be worse in low development areas. The skies were so black and horrible in London during the Napoleonic era that they were nearly lethal. Pollution in cities in third world countries is horrific because of the use of coal as a fuel, for example. As societies and civilizations advance, they move away from these energy sources to ones that don't pollute the air as much, such as hydroelectric and nuclear. Cars have been continually getting cleaner and less polluting over the years, reducing smog in cities.

Because technological progress and wealth results in less pollution, less stress on the environment, and a cleaner lifestyle overall. When you can produce the same amount of food in a tenth the area, you pollute less. When your energy sources get more clean and advanced, you pollute less. So as the world becomes more advanced, pollution is reduced.

The "green" agenda of running back technology and industry would result in more, not less pollution. As it turns out, it would result in more disease, more poverty, and more war as well, as our ability to survive requires more space and resources, and we start clashing with neighbors over wood and other more basic fuel sources. Driving with a car pollutes, but riding a horse requires huge areas of land to feed and house the animals, plus cleanup behind them on the streets, which actually is more stressful on the environment overall.

So next time you see a report on air quality, look at what's said and what is not. Look at what actual data is offered, see if the writer bothers to talk to any experts or only advocates for certain environmental causes. The internet makes it so easy to check this stuff out, there's no excuse to just read and trust a reporter, regardless of where you read it.
Posted by Christopher R Taylor at 11:01 AM

The "green" agenda of running back technology and industry would result in more, not less pollution.

It's not really "running back technology" so much as restricting its access.

For example, one of the earliest environmental activists proposed restricting air travel to "protect the ozone" by making it a) the fares hideously expensive and b) the prospective flyer had to prove via application that the travel would be socially useful. The former meant only those with money could fly by air and for the latter, 'Society' had to approve the reason. Between security issues, high fuel prices, and various and sundry conditions that make air travel both inconvenient and unprofitable (with all that entails), that idea has pretty much been rendered moot.

The new idea is mass and high-speed transit between densely populated urban areas meaning the proles live in the cities. Suburbs are a no-no, and rural living would be limited to those who had to be there by necessity and those that could afford to be there.

Combine that with your remarks, and could be surmised that it's becoming more a matter of a wanting to exercise authority and control than advocating environmental causes.

Wasn't that what Pol Pot wanted, to get everyone to living in cities?

The value of your travels does not hinge on how many stamps you have in your passport when you get home -- and the slow nuanced experience of a single country is always better than the hurried, superficial experience of forty countries. Love Sms , Love Text

It's sad to think that cities and other industrialized countries are tremendously experiencing air pollution. As human beings, we need to breathe fresh and healthy air. We can get that feeling by visiting some resorts & holiday park, This will allow us to enjoy nature and experience a healthier life even just for a day or a week.