"You'll vote for who we tell you to!" 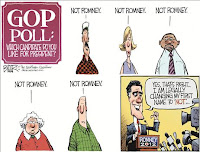 A lot of people watching the US presidential elections are confused by how the GOP voters keep looking for someone other than Romney and pushing away from him. Several contenders have risen, and outside the beltway and mainstream, entrenched GOP leadership its hard to find a single commenter who wants Romney as the nominee.

At first glance he seems like a decent choice. He looks good on camera, has proven he can govern with a leftist congress battling him, he's been in an executive position so he knows the drill better than just a legislator (something we pointed out endlessly in 2008), and he is a good enough speaker to deal with problems and campaign well. He has little negative press and image among the American voters.

Unlike Perry, who is terrible in debates and seems to stumble over his words a lot, or Gingrich, who has more baggage than one of those little trains at the airport, Romney seems like a decent candidate. So why does the Tea Party Movement and Republican Party core, the libertarians and the conservatives of America seem to oppose Romney so strongly?

Well most of the opposition, I believe, comes from the presumption and support by the GOP leadership. The party chose him as the anointed one, they decided he's going to be the nominee and they don't really care who else runs. And that annoys a lot of people out here. The GOP leadership has given us a string of lousy, left-stumbling bozos over the years, insisting that the "next in line" gets their shot, from Dole to Bush to McCain and we've had enough.

Enough of being handed the guy who worked up the political system and is a huge insider. Enough of guys who can once in a while talk conservatism but have no inclination to govern that way. Enough of being told who we're going to vote for.

The GOP was told plainly and repeatedly in blogs, articles, letters, cards, emails, and in person that if they threw another obnoxious "RINO" up as the nominee, they'd lose in 2008. And lo and behold, they lost.

Sure, there are other reasons to oppose Romney. He comes across as a snake oil salesman. He changes his mind on almost every single topic when the political winds blow except the one that annoys us most: the state health insurance program he piloted and the federal bill was based on. He governed to the left of center on almost every topic. There's a lot of reasons to be annoyed with Romney's attitude and apparent sneering contempt for everyone but himself. He lies a lot and he's not very good at it. he's not charming or winning, he's just slick.

But mostly its just a big finger for the GOP leadership and their ideas of inevitability, electability, and who gets the next shot. You don't control conservatives and libertarians who aren't even in the party, and you don't control the Republican Party. The party leadership administers the party, they don't govern it. They do the nuts and bolts money raising and organization, the members run things.

That's why you guys got stomped two elections in a row: voters reminding you who's in charge. And you never, ever seem to learn.

This time around, if Romney gets the nod, he'll get the votes, because people cannot stand another 4 years of Obama's incompetent destruction of the nation. His vision for America is something nearly no American shares. But will Romney win with supporters barely able to stomach his presence? With frustrated, annoyed voters? I'm not so sure. And it will be the fault of the GOP leadership if they force Romney on us and lose.
Posted by Christopher R Taylor at 11:33 AM

I agree with what you say here, but I think Romneycare is the main reason conservatives oppose Romney. If he had never implemented mandated healthcare in Massachusetts, he'd be the front runner right now.

What puzzles me is that conservatives keep flocking to Newt, who supported federally mandated health insurance until sometime after May of this year, over Romney who has never advocated for mandated care at the federal level.

I am starting to think that either Newt OR Romney are likely to spur a libertarian minded third party candidate if they win the primary. Glenn Beck may be crazypants, but he has a significant following and it is a big deal when he says he'd rather vote for third party Ron Paul over Republican Newt Gingrich, even if it means giving Obama a second term.

I'm also increasingly disturbed by how conservatives are so ready to trash Romney but hold up Newt as a model of conservatism. There seems to be an ongoing effort in the dextrosphere to generate enthusiasm for Newt, and quite frankly some of the articles I've been reading are getting ridiculous. I mean, Roger Simon (co-founder and CEO of Pajamas Media) actually penned these words today: "Only Newt dances. Only Newt, on occasion, is original. Only Newt — and here is the important part — has the capacity to wake us up."

From here on out, I am referring to Newt as the Conservobamamessiah.

Next up: Grecian Columns

As much as people are upset with Obama and I believe they are very upset and tired of the mess that Obama and Congress have made of things. I do not think that Romney or any other Republican is going to be President. My prediction is that Gingrich wins the primary. I do not know why but that is what I am feeling.

Lance, I am admittedly on the fence about the GOP's chances of winning. One thing I keep going back to is that John Kerry in 2004 was as poor a candidate as Newt or Romney in 2012, and he came within 38 electoral points of beating President Bush, and President Bush was almost 20 points more popular then than Obama is now.

Another factor to consider if it is a close race is that the Census took quite a few Electoral votes away from northeastern liberal states and reapportioned them southern conservative states.

If the Republican candidate can swing Florida, North Carolina, and either Ohio or Pennsylvania, then all the rest of the states could vote the same as 2010 and the Republicans will walk away with the White House.

I think Romney probably has the best odds of pulling that off, but it isn't inconceivable that Newt could do it.

What I worry about most at this point is that either Newt or Romney will inspire a third party conservative/libertarian candidate.

At present it looks like Obama has absolutely no chance, but its about a year away and a lot can change in that much time. Congress will almost certainly shift to Republicans, which would be enough for me if it wasn't for the abuse of executive power and agencies that President Obama is engaging in.

Well, it is telling that according to almost every poll, if the election were held today Obama would beat almost all the Republican contenders in spite of the fact that he is fairly unpopular (at least in terms of the popular vote, I have not seen any polling that breaks it down in terms of the electoral college).

I haven't really looked much at how the Congressional race is shaping up. If the Republicans could take the Senate that would be wonderful.

Conservative PUNDITS seem to be switching to Newt. Conservatives (like me) don't like either Romney (because we think he's a statist) or Gingrich (because he thinks he's smarter than everyone else, just like the current occupant of the Oval Office)

Nobody has voted yet, except the media and a few thousand people polled. No one has asked my opinion. They'll get it in the primary, and in November.