"What? Y-you gotta vote, dude. Haven't you seen the Rock the Vote stuff or, or Puff Daddy's Vote or Die??"
-Kyle 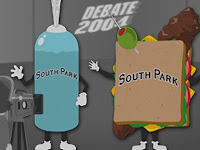 Instapundit and American Digest both (as did Moe Lane) linked to my McCain post below, and I really appreciate the traffic and comments. I hope at least some of you come back again to my little blog. However, I think its useful at this point to explain why I and many others didn't vote for McCain in 2008.

We knew President Obama was going to be bad (although how bad nobody could have predicted). We knew McCain probably would have been a marginally superior president at least. Our refusal to vote for McCain wasn't that we were ignorant of the difference, it was basically the same culmination of outrage and fury that created the Tea Party.

Conservatives have tried and tried for years to get the Republican Party to listen and do what is right for this country. We've voted for the best guys we can and over and over they turn into Beltway Bob, just doing what the establishment GOP wants, to give the party power and make themselves and their buddies rich.

We gave the GOP congress in 1994 and they crumbled after a few years of hard work. We gave the GOP the presidency and congress in 2002 and they piled on so much spending they doubled the debt and created two gigantic new permanent spending programs. In 2008, the conservatives of America, with not a few libertarians, said "enough."

Senator McCain has made a career of showering hatred on conservatives and almost all we believe in. He mocks us continually with a sneering look on his face. When the election came around we looked at those names and said "I'm not going to support you, jackass." None of the above looked a lot better than either candidate.

Senator McCain shouldn't be in congress, let alone the presidency. He is an insufferable, unstable old man who should be retired and shaking his fist at kids that go by. I can't stand the guy personally, and in no conceivable way was my post an endorsement of him.

What it was, was a sad, depressing admission that things have gotten so bad in the United States that the douche would have been less godawful for our country than the turd sandwich.
Posted by Christopher R Taylor at 9:06 AM

And yet the GOP seems to be intent on nominating the same type of candidate that they did before. The more things change the more the GOP stays the same.

Sure looks that way. And there's no alternative in sight. You've got bad and immensely bad to choose from, realistically. I think this country is sunk.

1. To be liked. By the press, by the Democrats, by nearly everyone. The mentality is that of fifty years ago, when politics was a club or sorts, albeit with them as junior members.

2. To control their candidates. Regan was an anomaly in that he spent decades in the weeds, building up his political philosophy and organization. When the time came, he had so much momentum that the only options the establishment GOP could do was go along or get left out. Of course they worked to undo everything Regan did afterward.