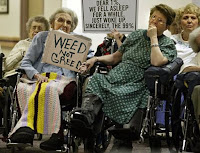 There's been some buzz on the internet lately about a Congressional Budget Office study of entitlements and income inequality. As I've written about in the past, inequality of income isn't a bug, its a feature: that's the default of life and its inevitable given different peoples' interests, ambitions, and abilities. Any attempt to eliminate equality actually ends up hurting people more because it destroys ambition and productivity, bringing everyone down. What matters is opportunity and liberty to achieve what you are able to and desire, not equality of wealth.

The CBO study actually showed that programs such as social security and medicare actually tend to increase inequality of income rather than reduce it, at least in the period studied from 1979 to 2007. How, you ask?

In other words, the money is going away from poorer homes and to richer ones. That doesn't make sense until you realize that the primary recipients of social security and medicare are elderly people.

Younger people, especially just married and just out of college, tend not to have very much money. I remember well eating spam and ramen and doing without heat in college. I know lots of young couples so poor they can't afford to go on a special night out, buy furniture, or even pay for a car. That's often how you start out, and you build up from there. It was assumed for most people, but today a lot of young people figure you should start out with the six-figure job, two luxury cars, a boat, and a McMansion.

Those young people pay taxes, which removes money from their pockets and puts it in the hands of... old people who get social security money no matter how rich they are, and depend on medicare for medicine every day. These are the generation who worked their lives and have homes, cars, boats, and savings to show for it. Young people almost never worry about insurance or health care, they hardly ever need it. So the transfer of wealth goes from the less wealthy to the more wealthy, resulting in the poor getting poorer.

So those young struggling people angry that their Syrian Medieval Lesbian Women's Studies degree was worthless should be directing their anger at the elderly, not Wall Street, at least in part. Of course if you asked them about that transfer, they'd think you a monster for suggesting its bad.

And as the boomer generation ages, those former yuppies are retiring and getting social security, transferring the wealth even more because there's more boomers than occupiers. Now, boomers hate to think of themselves getting old, but the fact is, they're going to destroy the social security system so nobody gets anything out of it in later generations. They're going to so overload the system that it cannot continue, medicare is exploding in cost and will continue to, exponentially as this generation ages.

So how do you deal with that on the left? What do you do with this information? Do you rethink the entitlement system? Do you restructure who gets money and who doesn't? No, you scream for more taxes on the wealthy and distract people with road shows of protesters crapping in the park and spreading lice and dysentery. You call anyone who suggests cuts cold hearted and awful. And you never, ever accept any suggestion that this needs to be addressed because your entire political power structure depends on it.
Posted by Christopher R Taylor at 9:54 AM