"And her artist statement is essentially that by turning the comic into a painting she’s giving it value it didn’t have before. Pretentious, and ignorant of the value of original comic art."
This is a painting by Sharon Moody, part of a somewhat popular trend in art: 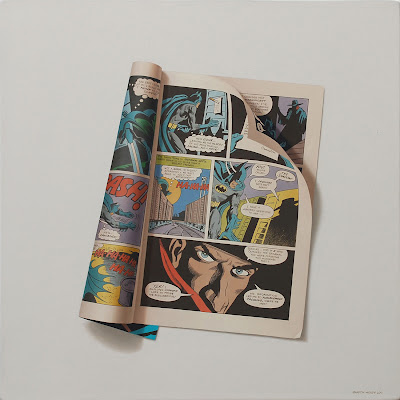 Wow, Batman and the Shadow together in a comic! Why didn't anyone ever think of that before? The truth is, they did. Here's the original comic book page, from Batman 253, back in the 1970s. Dick Giordano and Irv Norwick did the art: 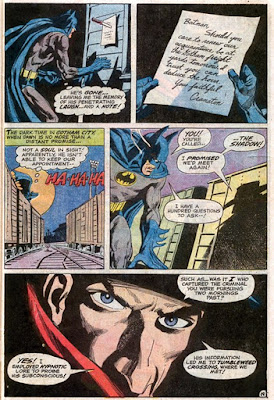 As you can see, the Sharon Moody piece is basically a pixel for pixel reproduction of the original art, down to the exact ink lines. Its like she photocopied the comic book and is selling it for hundreds in a gallery. You can buy Batman 253 for $3.20 according to the Comics Price Guide and frame it for$75 bucks or so if you really want to.

So what is this artist attempting to do here? This is what her website says:

Recently I have been making paintings based on games, toys and other forms of entertainment that reflect the universal human desire for amusement, diversion, and stimulation. These seem a proper subject for trompe l’oeil paintings, which by their very nature are intended to divert and entrance us with their illusionism and by the questions they raise—in a playful way—about perception and reality.

Ideas I am exploring include the relatively new (in the entirety of human history) concept of childhood; physical objects used as playthings; the process of play as a way to learn; and the commercial branding of products for sport and play. … Comics are thought of as adolescent fare, and are inexpensively printed for immediate consumption and immediate disposal; Something’s Going Down in That Museum Right Now depicts the anticipatory moment of turning the page at the story’s denouement.

Clever, I guess, but all she accomplished was to make the comic look 3D and smooth the color out. Here's the problem: she gives absolutely no credit to the original artists or writer. As Scott Edelman points out on his blog (where I first saw this):

My issue is this—an apple, once you set aside either a Higher Power or human hybridization (depending on your belief system), has no creator, but the pages of art apparently reproduced here line for line do. What’s going on here is at the very least a collaboration with Kirby, Buscema, Novick, and others without those artists’ permission, and at the very most … well … I’ll let others decide whether they want to go there.

This isn't homage, it isn't tribute, it isn't even parody. This is a direct copy, as if the artists aren't alive any longer, as if this is like copying cave paintings or carvings from prehistoria. Or, more troubling, as if comic book art is so inferior and insignificant that the usual courtesy and copyright laws just don't apply.

One commenter tried to defend this by stating "Sharon’s art is NOT in the line work. Its in the presentation of turning the page! She is making appropriate social commentary on the dying medium of comicbook pop culture with the advent of digital media."

But that's not the point. Whether or not showing it with a turned page is "art" or not (dubious at best), the problem is her utter lack of attribution to the original artist. Like rap music that samples a song and doesn't bother giving credit, this is just incredibly rude and offensive at best theft at worst.
Posted by Christopher R Taylor at 8:53 AM

Baloney. Of course it is an exact representation; Moody is a photorealist. These comics are universally recognized; no one thinks she invented Batman. Trompe l'oeil paintings are often of paper objects (because they are spatially shallow), and comics are mass-produced printed objects. I see this a a fond tribute to the classic era of comic books and a valid form of Pop art.