"A young man who wishes to remain a sound atheist cannot be too careful of his reading."
C. S. Lewis 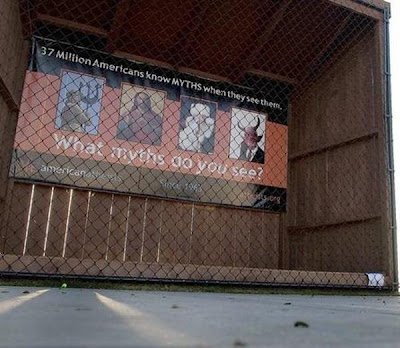 In Santa Monica they have a public space where Christmas displays are erected. They held a lottery and atheists won 18 of the 21 spaces, either by astounding luck or heavily piling up the numbers so they'd likely win most of them.

What I find noteworthy here isn't the pathetic need of some Atheists to proselytize their religion or the compulsion to shower hate on Christmas, but the conspicuous lack of a certain kind of religion to attack. This time of year is sacred to Muslims also, its a holiday called Al-Hijira and its when they celebrate the new year, commemorating the migration of the Prophet Mohammad and his followers from Mecca to Medina.

None of the atheist signs attacked either Hanukkah or Al-Hijira. Just Jesus (called a "myth" above, despite overwhelming evidence of his historical existence) and Santa Claus. Oh, and Satan, because... well because they hate Christians. Oh, and the Winter Solstice celebration of Wiccans is ignored as well. Because Atheist for a lot of people means "anti-Christian."
Posted by Christopher R Taylor at 7:03 AM

Well, it would be kind of sad to see a nativity scene constructed behind a giant chain link fence... but yeah, you are right, this is ridiculous.

Why are they so concerned with the beliefs of others? Mind your own damn business.