"Really, I can't believe someone that describes themselves as a naturalist would believe that we need to interfere with the natural climate." 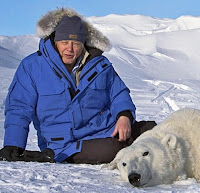 Sir David Attenborough is one of those guys who got knighted for his entertainment productivity rather than great deeds of valor or service to the crown, a 20th century knight. His documentary work on wildlife and nature is well known through the world as being of fine quality and beauty, and most people regardless of their other ideology enjoy the work.

Recently, thanks to Right Wing News, we find this quote from Sir David about the climate in an interview with Bloomberg News:

Q: What would you say to the still sizeable body of skeptics who doubt global warming is man made?

A: It would seem to me that it would be absolutely extraordinary if the most numerous and powerful species that the planet has ever seen didn’t have an effect on the climate. It would be absolutely amazing. But whether we did or whether we didn’t is neither here nor there, when we know we’re faced with the problem of increasing temperatures and climate change. No one can deny that the climate is changing – it IS changing. And if we do nothing, it’ll be changing with increasing speed.

Now first off its nice of them to admit there is a sizeable body of skeptics out there; there always has been but for a long time the attempt by the climate alarmist was to claim there wasn't very many.

But Attenborough's answer is just depressing. Not based on what he's trying to say but what he actually did say. Take a look here:

It would seem to me that it would be absolutely extraordinary if the most numerous and powerful species that the planet has ever seen didn’t have an effect on the climate.

Sir David, please. This month's issue of Discover magazine has an article about how the human body has a hundred trillion microbes living on it. As Carl Zimmer writes: "You carry more microbes in you this moment than all the people who ever lived." As in, humans are absolutely not the most numerous species on the planet, now or ever. It is estimated that 780,000,000 ants live per square mile of earth. This is simply an baldly ignorant statement by David Attenborough.

Then there's this statement:

No one can deny that the climate is changing – it IS changing. And if we do nothing, it’ll be changing with increasing speed.

Clearly, the climate is changing. That's what climates do, there's never been a period of time in this history when the climate was completely static and fixed. There is no ideal climate the planet "wants" to be at, a median it tends to swing toward as an average temperature and status. Climates change, its the one thing we know for sure about the atmosphere. Its been much warmer globally and much cooler globally than it is now. The planet has seen far worse storm periods and far more placid. The planet has seen far greater CO2 concentrations and far fewer.

Yes, Sir David, the climate is changing. Whether its changing faster or slower is unknown but there's no rational or scientific basis for declaring it will get faster whether we "do something" or not.

In short, David Attenborough is a gifted film maker and narrator, but essentially he's a dumb actor like Matt Damon or Ted Danson. That doesn't make him a bad guy, it just means he's ignorant about science, climate, and zoology despite his many years making nature films. And that's disappointing because of how great his work has been.
Posted by Christopher R Taylor at 9:30 AM