"And now I need all of you need to get off my lawn." 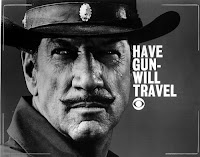 Netflix has an awful lot of content, more than any other online movie provider by far. They've been at it for a long time and have built up a tremendous library, and the deals they got early on made sure they had a lot of content available. What's not on there, however, is the frustrating part. Like I-Tunes which never seems to have anything I search for, Netflix rarely has what I think about watching on the spur of the moment.

Most of what is missing is old TV series content. There are scores of old TV shows in circulation right now through syndication that really ought to be on Netflix, but aren't. I would love to see old episodes of shows like Peter Gunn but they just aren't out there. Even far more popular, known shows such as Rockford Files aren't available. And it seems like they'd be pretty cheap to obtain. Its possible that Netflix has judged that they wouldn't get enough business from old reruns of Your Show of Shows to buy them, and its possible that a lot of old shows are just not available any more, in any format.

Where are “Gunsmoke,” “Columbo,” “Andy Griffith,” and “Mission: Impossible”? Where are “Wagon Train,” “Alfred Hitchcock Presents,” and “Thriller”? One of the pleasures of writing about Hollywood is having the opportunity to introduce or re-introduce the classics. And I’m not that old. I’m only 45, and many of these shows that I’ve managed to discover were well before my time.

As a teenager, I used to get up at six a.m. every Sunday morning because a local PBS station aired a two-hour block of “George Burns and Gracie Allen,” “Jack Benny,” “Alfred Hitchcock Presents,” and “Our Miss Brooks.” I remember all the tin foil I wasted trying to get “The Honeymooners” off of WGN in Chicago. What attracted me to these shows is what attracted audiences decades earlier. They were and are marvelously entertaining, well acted, and clever. That hasn’t changed.

Until we get to the point where you can watch anything whenever you want, streamed directly to you, how you want, we're really not at the new age of television yet. I want to be able to grab anything that's in existence and just fire it up at will, and because of the competition and lack of anyone younger than 30 working at these places, it just doesn't happen yet.

When we get there, that will truly be the golden age of television, because then you could skip the shopping channels, reality shows, advertisements, and awful sitcoms and just get the cream of the crop, the finest available material immediately and at your convenience, like browsing through a fine library.

I'd rather watch any given episode of The Honeymooners than five minutes of just about anything on television anywhere today. I'd rather watch The Young Ones than any reality show ever produced.

And maybe that's what the guys who own these old shows are worried about: where's the motivation to watch the new shows those advertisers are paying for if there's ten times the content and ten times the quality available from streaming? Although sometimes I wonder if they can even see that far ahead.
Posted by Christopher R Taylor at 8:24 AM

First season of Rockford files (minus the final 2 episodes) is available currently on streaming on Netflix, well it is right now anyway, they come and go so fast it's hard to tell. There is a wiki supposedly that has a definitive list of available, and when they will go off of Netflix. But I do agree, there is a lot, but not enough for me, and I want it all, and I want it now!

Yeah, Alfred Hitchcock Presents and Thriller have both been on streaming as well, plus Twilight Zone and every episode from every Star Trek franchise.

Netflix instant is a pretty good resource for sci-fi fans. I'm currently about half way through the (rebooted) Battlestar Galactica series and am really enjoying it.
Also watched a lot of the episodes of Star Trek: Enterprise and was surprised at how good they were.

But yeah, C_T makes a great point, there are a ton of old nostalgic shows they could probably get really cheap and show on there. Some of my favorites from childhood that I'd love to see are The Tomorrow People, The Powers Of Matthew Star, You Can't Do That On Television, the Dungeons and Dragons animated series, and Moonlighting.

Have Gun Will Travel streams.

Yeah I just liked the picture, as evidence of an older show. Its pretty good too.