“It’s a simple theory — one that speaks to our rugged individualism and healthy skepticism of too much government. It fits well on a bumper sticker. Here’s the problem: It doesn’t work.”
-President Obama 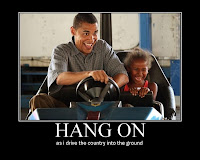 The dextrosphere (politically right-leaning internet) is abuzz with the Republican Party's recent statement that they didn't want to attack President Obama personally:

"We're hesitant to jump on board with heavy attacks" personally against President Obama, Nicholas Thompson, the vice president of polling firm the Tarrance Group, said on the call. "There's a lot of people who feel sorry for him."

Voters "don't think he's an evil man who's out to change the United States" for the worse--even though many of the same survey respondents agree that his policies have harmed the country, Thompson said. The upshot, Thompson stressed, is that Republicans should "exercise some caution" when talking about the president personally.

Whether the polling data is accurate or not, and whether people actually feel sorry for the president or not is up to some debate, but what the GOP wants here is questionable.

What they mean by "personal attacks" is not exactly clear. I believe real personal attacks have no place in politics, despite their being common in the 18th and 19th century in America - even at the presidential level from our founding fathers.

So calling the president a stuttering idiot or jug-eared loser is improper and should be avoided. How much he stutters or hems and haws when not carefully fed lines by a teleprompter has nothing to do with how well he does the job of president. Attacking a candidate personally surrenders issues and demonstrates your pettiness, not anything bad about them. How big President Obama's ears are is irrelevant to his ability to be the President of the United States.

There is a lot of ammunition to hit the president with. You don't even have to touch on the "corpsemen" or "intercontinental railroad" or "58 states" lines. You can avoid the bald faced lies that his parents met at the Selma march or that his uncle was at Pearl Harbor and helped free Auschwitz. You can ignore the various gaffes and stupid lines over the years, because while they are humiliating and worthy of mockery, again they say little about his ability to do the job.

Instead, candidates should hammer the president on his performance, showing that President Obama is incapable of doing the job he's gotten. That he was never ready, lied in his interview, and should be fired, replaced by another candidate.
There's so much out there to pound on without personally attacking the president its difficult to keep track of. This guy has been absolutely awful, just the worst president in my life, and it takes some doing to be worse than President Carter was. Jim Hoft at Gateway Pundit has a rack of charts he runs every time someone tries to pretend this president is doing okay, and they are devastating.

President Obama was given a really tough job and failed to rise to the occasion. He was handed a terrible economy and made matters worse. He's been confronted again and again with foreign crises and bungled them. He has broken his promises, betrayed his core statements while campaigning, and been demonstrated to be utterly unable to do the job he was hired for.

The problem is I fear the GOP sees most of that as personal attacks. They would see any mention of how terrible a job President Obama is doing as being an attack on him, when it is actually an attack on his policies. I further think that they believe that attacks on the president will be called racist, and they fear that more than anything else.

So they want a campaign that doesn't directly target President Obama when he's at his weakest, allowing him to control the narrative and the press to direct coverage around his bad points and at the GOP candidate without any opposition. And that's simply political suicide.
Posted by Christopher R Taylor at 7:33 AM

I think every single candidate in the GOP Primary race would consider the things you mentioned to be fair game.

I think they are just warning candidates that bringing up things like birth certificates, personal associations, and suggesting that Obama harbors some kind of secret goal to destroy the economy... those things tend to hurt Republicans more than they hurt Obama because even though many Americans don't approve of the job he's doing, they tend to like him personally (by all accounts he is a good husband and father, and that goes a long way with a lot of people).

I live in a state where it is surprisingly easy to find otherwise normal sounding people willing to state publicly that they think Obama is a Muslim and has a plan to bring Sharia law to the United States. Those people don't need a
Republican candidate trying to pander to them on this issue. They are going to vote for anyone the Republicans put up.

I suspect that the only reason he polls as personally likable is that he's black, and people don't feel comfortable saying that they don't like him. I don't like him because he's a condescending narcissistic snot.

On the other hand, they're not the Stupid Party for nothing.