LF: You intentionally sabotaged the project with your script?
Lucas: Unfortunately, yes. 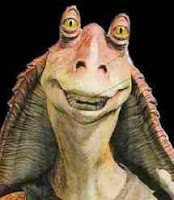 While beta testing the Star Wars Old Republic MMOG, I noticed in the general chat there were two groups of Star Wars fans. The first were Lucas die-hards, guys who just worshiped him and thought he was a visionary genius. The second were guys who liked the setting but weren't big fans of Lucas. However, even the second group tended to believe Lucas was brilliant in his first three Star Wars movies, and lost it for the second.

I tended to lean that way, but I knew better. The reason I knew better is because I knew who wrote and directed The Empire Strikes Back and Return of the Jedi. Cracked Magazine explains in their article 6 Pop Culture Visionaries Who Get Too Much Credit:

First things first: Lucas absolutely was the brilliant mastermind behind the Star Wars movie ... prequels. I through III? That was all Lucas. But IV through VI? The Empire Strikes Back and Return of the Jedi were directed by Irv Kershner and Richard Marquand, respectively, and both screenplays were written by Lawrence Kasdan. But that still leaves Lucas as the writer/director of Episode IV, right? That's the big one: The Star Wars that put the "Star Wars" in Star Wars.

But A New Hope wasn't entirely Lucas, either: A fellow USC film grad, Gary Kurtz, who first collaborated with Lucas on his breakthrough film, American Graffiti, was producer for both Star Wars and Empire. Kurtz did more than an ordinary producer, however: Beyond running the day-to-day operations of the films, Kurtz also ended up coaching the actors (which is, technically speaking, the director's job).

They go on to note that many aspects of the film were changed from Lucas' original vision, but there's another they didn't mention: The Hidden Fortress which Lucas stole significant portions from Japanese writer Shinobu Hashimoto and directed by the great Akira Kurosawa. Basically he swiped the story, using old established Hollywood serial themes, had his story and characters enhanced and adjusted by the actors and others on the set, and put out a pretty good movie (but its kind of cheesy today). From that he put out sequels, but they were produced by him and much better.

When left to his own devices without any input or editorial restrictions we get Phantom Menace. THX 1138 and American Graffiti were better films, but neither were the work of genius. Lucas is a pretty good idea guy for general settings, but lousy at writing, directing, and character creation. That's why the books, games, and other materials put out about Star Wars were so much better than the latest trilogy: less Lucas.

***UPDATE: based on the missing Lucasfilm interview and the date it appears that this probably was an April Fool's gag; if so it was a particularly effective one, because it reads exactly like a real interview and sounds just like something Lucas might say.

Still, the plan to redo the original trilogy in 3D is out there, and now Lucas is claiming it wasn't his fault the latest trilogy sucked so bad, it was that technology hadn't caught up to his vision, and he was rushed so the Phantom Menace script wasn't ready yet, and on and on. In the Lucasfilms interview he blames "certain people" he won't name for having JarJar Binks in the film and so on. Basically despite having total control, no editor, and making the movie entirely on his own dime, Lucas is blaming other people for how his movies suck.

What it reads more like is he had all these neat ideas and went nuts, and then fans showered him with contempt, idiotic inconsistencies and reversals in his stories, and he's pretending it was never his idea, he was "forced" into it all. Sure, George.

The Cracked article mentions several other "visionaries," such as Roddenberry (the sci fi writers brought onto the show really made it what it was, particularly writer/director Gene Coon), Stan Lee (brilliant visionary, but what we remember and know about the X-Men was Chris Claremont and John Byrne's version, who took the concept to an entirely, better level), Gary Gygax (Dave Arneson actually developed D&D out of Chainmail), and so on.

Not mentioned was Steve Jobs (who bought the entire concept of Mac and using a mouse from Xerox) probably because they've already done articles on how overrated Jobs was.

Incidentally, another thing in SWTOR chat: the younger the player, the more likely they were to love the new trilogy and dislike the original.

*UPDATE: Forgot the link to the lucasfilms interview, added that in.
**UPDATE: Apparently the Lucasfilms interview has been buried, here's a link to a movie blog with an excerpt. Its from April; I thought this was old news but I'm getting hits like crazy as if people never heard of this interview before.
Posted by Christopher R Taylor at 8:15 AM

If we took any of the people you mention out of the equation, the projects you mention would probably not have been made at all, and certainly not in the form we know them.

This negates the entire premise of the Cracked article, and your comments as well.

PS Stan Lee originally co-created the X-Men with Jack Kirby. No one disputes this. The Claremont/Byrne/Austin version is a reboot.

Roddenberry had actually been a fairly competent writer and producer prior to developing Star Trek.

He still gets credit for coming up with the idea; even more so, he should get credit for recognizing and using both accomplished and up-and-coming talent.

The interview you're referring to was an April Fool's joke.

That makes sense, but I can't find anything about it out there. The thing is, if its a joke its a really effective one, because I can sure believe every line of it.